VIDEO: A cyclist in Dublin rams into the back of a car and leaves massive dent

Be careful on the roads.

Johnny Eutah was cycling to work on Tuesday morning when he witnessed an accident between a cyclist and a car.

Johnny, who was wearing a helmet cam, was at on Eglington Road near Donnybrook when a guy overtook him on the outside.

The guy was going pretty fast and failed to anticipate the car in front of him was about to stop and this happened.

The collision was bad but could have been a lot worse and thankfully nobody was injured.

The car took a bit of a beating though, the cyclist's leg smashed in the boot. 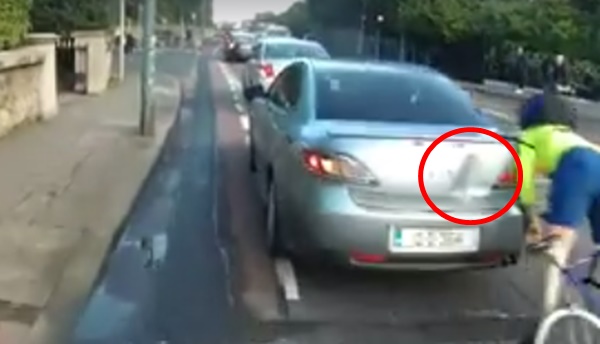 Speaking under the Facebook video, Johnny said: "He got up and talked to the car owner but the driver never got out and I don't think details were exchanged.

"I talked to the cyclist after and he seems like a nice guy, just made a mistake, stupid mistake all be it."

For more information on road safety, check out the RSA website here.

popular
QUIZ: You'll do well to get 100% in this General Knowledge Quiz
Disney+ has just added 10 big movies to its library
Gardaí urge public not to share "upsetting" pictures of fatal assault of Paul 'Babs' Connolly in Westmeath
25 years ago, Sylvester Stallone delivered his best performance in a hard-hitting crime drama
FBI release findings of Rust investigation after shooting of Halyna Hutchins
QUIZ: You'll need to be razor-sharp to get 100% in this General Knowledge Quiz
The JOE Friday Pub Quiz: Week 307
You may also like
2 days ago
The 10 must-watch events at the 2022 Dublin Fringe Festival
3 days ago
Don't miss this temporary pop-up night club, coming to Dublin for one night only!
3 days ago
Man charged in connection with death of Sean McCarthy in Dublin
6 days ago
Man in his 20s in critical condition following assault at public transport stop in Dublin
6 days ago
Murder investigation launched after discovery of man's body in Dublin apartment
1 week ago
Man arrested following discovery of a body in apartment in Dublin
Next Page