VIDEO: Athletes post footage of Olympic village to show the absolute state of the place

It's not even finished...

The Rio Olympics is already shrouded in controversy prior to the opening ceremony as doubts remain over the safety of the Olympic village and some athletic areas.

Athletes have shared videos of their accommodation in the village to show how poorly prepared it was for their arrival.

The footage captured here was reportedly taken by the Jamaican Olympic team when they arrived at their accommodation earlier this week and you can see that workers are still building in their dorm while they''re supposed to be living there.

You can see cables and rubble all over the dorm, and large parts of it are yet to be completed. 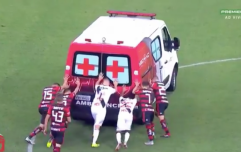 END_OF_DOCUMENT_TOKEN_TO_BE_REPLACED

Athletes train their whole lives for a chance to compete at the Olympics and they deserve better than to be greeted with this scene when they arrive where they're supposed to live for the next couple of weeks.

Let's hope that the rest of the accommodation is in a better way...

popular
20 years ago, one of the best sci-fi movies of the 21st century was a box-office bomb
Peter Kay moved to tears on stage while opening his first stand-up tour in 12 years
U2 drummer Larry Mullen Jr. says band may perform without him in 2023
Simon Cowell concerns fans with appearance as they 'don't recognise him'
Netflix has just added 30 big movies to its library
Boy, 1, eaten alive by 11-foot crocodile in front of dad on fishing trip
Mia Khalifa claims seaside town is better than Miami
You may also like
17 hours ago
Football legend Pelé reportedly begins end-of-life care in hospital
1 year ago
Galway castle makes list of weirdest Airbnbs in the world
1 year ago
Watch the official trailer for Netflix's hotly anticipated Pelé documentary
3 years ago
Brazil's President seems to accuse Leonardo DiCaprio of starting the Amazon fires
3 years ago
Brazil has rejected the $20 million aid offered by G7 leaders to fight Amazon fires
3 years ago
Brazilian president to send army to fight Amazon fire
Next Page