Video: Behind the scenes documentary takes a look at the making of 'Road Bike Party 2'

This behind the scenes documentary of 'Road Bike Party 2' shows us the outtakes and heartbreak of one of the biggest bike films ever made.

Do you remember the 'Road Bike Party 2' video that we featured on the site a few months ago? The video saw three professional trial bike riders, Martyn Ashton, Chris Akrigg and Danny MacAskill, pulling off stunts on an €18,000 Colnago C59 Italia – the ‘Ferrari’ of bikes.

Well the behind the scenes documentary of the making of 'Road Bike Party 2' has just been released and it’s definitely worth a look. 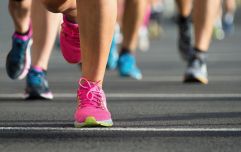 END_OF_DOCUMENT_TOKEN_TO_BE_REPLACED

In the video, Martyn discusses the success of the first 'Road Bike Party', along with the result of being paralysed from the waste down after a trick at a stunt show went horribly, horribly wrong midway through filming 'Road Bike Party 2'.

It’s an incredible story and it just goes to show what you can achieve and overcome once you put your mind to it.

The Big Reviewski || JOE · Wonder Woman 1984 star Kristen Wiig & director Patty Jenkins on comedy, Cats & handsome Irishmen
popular
QUIZ: Can you name the Marvel Cinematic Universe film from just a single screen shot?
QUIZ: Can you pass your driving test and guess the meaning of all these road signs?
QUIZ: Can you correctly identify these European country flags?
The JOE Movie Quiz: Week 85
The JOE Friday Pub Quiz: Week 226
QUIZ: Can you recognise each of these iconic Dublin pubs?
QUIZ: Name all the countries of the EU that contain 2 vowels or less
You may also like
2 months ago
Government confirms €63.5 million in funding for Greenway projects in 13 counties in 2021
4 months ago
€55 million allocated to 547 walking and cycling projects in eight counties
10 months ago
Liffey Cycle Route trial looks to be going ahead
1 year ago
Motorists face €120 fine and three penalty points for dangerous overtaking of a cyclist
1 year ago
Free bike lights to be handed out to cyclists in Dublin this week
1 year ago
Number plates to be distributed to cyclists in Mayo as part of new safety initiative
Next Page