That new haircut is bound to have reduced wind resistance too.

Conor McGregor could be forgiven for keeping a low profile in the run-up to his bout with Rafael dos Anjos at UFC 197, but that’s not really his style.

McGregor was out enjoying himself in Las Vegas last night, touring through Sin City in a Lamborghini Aventador and certainly not holding back on the throttle. 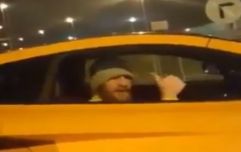 END_OF_DOCUMENT_TOKEN_TO_BE_REPLACED

Careful now Conor, apparently it's easy to crash those things into a wall.

Cheers to Freddy Murphy for sending this our way. If you have something you would like to share with us, send it to our WhatsApp number 087-4001102, editorial@JOE.ie or hit us up on Facebook or Twitter.

The Big Reviewski || JOE · The Big Reviewski with Dune, a mini-Hangover reunion & the best of Timothée Chalamet
popular
WhatsApp to stop working on 53 phone models, including iPhone 6
Updated Status Orange warning issued for three counties as heavy rain to continue
New true crime documentary series from Netflix looks gripping
Clashes between protestors and private security as tenants removed from Dublin property
The 50 most iconic songs of all time* have been revealed
PICS: The man with the biggest penis in the world has one unbelievable problem with it
People think they've figured out the ranking of the viewers on your Instagram Stories
You may also like
1 month ago
QUIZ: How well do you know your car logos?
4 months ago
The ultimate checklist of everything you need for your next Irish road trip
5 months ago
The iconic 'Bus W***ers' car from Inbetweeners is now up for sale
6 months ago
Two killed after Tesla car crashes with no one in driver's seat
7 months ago
Over 170 cars clocked speeding on Irish roads in first two hours of National Slow Down Day
7 months ago
Ireland's first average speed cameras to be introduced on mainline motorways
Next Page