Even by ice-hockey standards, this is a little bit over-the-top.

We’ve said it before and no doubt we’ll say it again; much like and probably even more so than other sports, if you play ice-hockey you’re likely to pick up an odd nasty injury or two along the way. 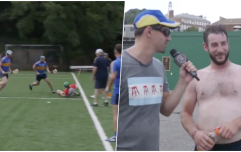 END_OF_DOCUMENT_TOKEN_TO_BE_REPLACED

It’s one thing picking up said injury in accidental circumstances, however, and another being the victim of a vicious attack on the ice, as was the case with Hannah Bates of the USA women’s under-16 ice-hockey team in a clash against Russia at the U-16 World Selects Invitational girls tournament in Budapest last Friday.

With Russia trailing 2-1 at the time, one of their players lashed out at Bates, who was just picking herself up off the ice when she had a stick smashed over her head; thankfully the helmet she was wearing prevented any serious damage being done but even with a helmet on she was lucky she wasn’t badly hurt.

What Bates did (if she did anything at all) to deserve such punishment is unclear from the clip above, but she didn’t seem too perturbed by it afterwards, even taking time out to thank Warrior Helmets for their role in helping her avoid concussion on the day.

Shoutout to Warrior for making Russian proof helmets that saved me from a concussion. https://t.co/VoTcjq3SvQ

We love ice-hockey but this sort of thing simply isn’t on. Play hard but play fair folks.

popular
Jordan Peterson suspended from Twitter over Elliot Page comment, says he won't apologise
The JOE Friday Pub Quiz: Week 301
County where winning Lotto jackpot ticket worth over €5.5 million was sold confirmed
Electric Ireland announces second major price hike in recent months
Parent's Benefit Leave in Ireland is being extended from today - here's what you need to know
One of the best sports movies of recent years is now available to stream at home
The full list of cancelled flights in and out of Dublin Airport on Friday (so far)
You may also like
1 week ago
US announces plans to majorly cut nicotine levels in cigarettes to reduce addictiveness
2 weeks ago
Aer Lingus announces flash sale on flights to America this summer
1 month ago
QUIZ: Can you name all the US States that contain 8 letters?
2 months ago
Joe Biden writes heartfelt letter to the people of Mayo
2 months ago
QUIZ: Can you identify these US cities on a map?
5 months ago
QUIZ: Can you name all the US states with a smaller population than Ireland?
Next Page