English golfer James Heath won a BMW i8 after acing the 16th hole of the BMW International Open in Cologne, Germany yesterday.

Here at JOE we have to take our hats off to Heath, who was left stunned when his 7 iron shot on the par 3 hole rolled right into the cup on the 16th green, winning him the supercar.

END_OF_DOCUMENT_TOKEN_TO_BE_REPLACED

"It looks fantastic," said the 21-year-old. "It's certainly an upgrade from my previous vehicle."

No doubt he'll be spinning around congested London in his new supercar capable of 0-60 in just 4.2 seconds, not bad for a professional golfer whose biggest win came seven years ago with a €37,000 purse in the Irish Open. 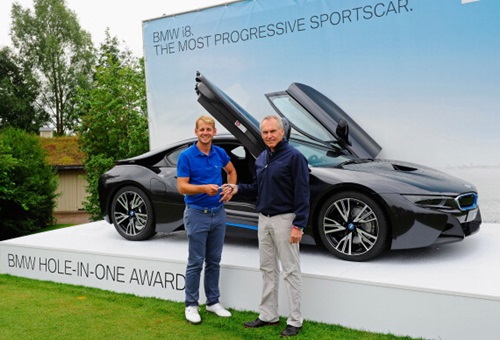 The Big Reviewski || JOE · TBR Spotlight: The Falcon and the Winter Soldier Episode Four - 'The Whole World is Watching'
popular
The 50 most iconic songs of all time* have been revealed
Beware of the very clever WhatsApp hack that is locking Irish users out of their accounts
Making A Murderer: The explosive and NSFW telephone call that implicates a new killer
Reeling in the Years was watched by over half a million people last night
People think they've figured out the ranking of the viewers on your Instagram Stories
PICS: The man with the biggest penis in the world has one unbelievable problem with it
Prince Harry issues statement following the death of Prince Philip
You may also like
1 month ago
Fine Gael senator says golf and sea-swimming restrictions should be lifted
1 year ago
"Very chaotic" - Irishman describes being struck by lightning on US golf course
1 year ago
Irishman hospitalised after lightning strike on US golf course
1 year ago
Shane Lowry given a hero's welcome in his hometown of Clara, Co. Offaly
1 year ago
Gardaí release plan for Shane Lowry homecoming in Offaly this evening
1 year ago
WATCH: RTÉ's interview with Shane Lowry's granny is absolutely wonderful
Next Page