Nike have released a new ad to celebrate the 25th anniversary of their famous ‘Just Do It’ campaign and they haven’t half pulled out all the stops.

In recent years, adverts released by global megabrands have often been like two or three minute blockbusters such is the amount of effort and money goes into them, but Nike have gone over and above the call of duty with this effort and the end result is pretty cool indeed. 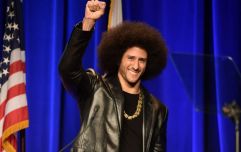 END_OF_DOCUMENT_TOKEN_TO_BE_REPLACED

The ad is directed by Nicolai Fuglsig – you might remember him from such adverts as the Sony Bravia commercial with the colourful balls bouncing down the street to the sound of ‘Heartbeats’ by Jose Gonzalez – it’s narrated by Bradley Cooper and features a brief cameo from Chris Pine, star of the recent Star Trek movies amongst others.

As well as that, Gerard Pique, Serena Williams, boxer Andre Ward and LeBron James also make appearances in a star-studded and action packed advert, the theme of which is to encourage and inspire ordinary folk to constantly push and challenge themselves in order to reach the limit of their physical capabilities.

popular
RSA confirm online theory tests to come into effect later this month
Micheál Martin says international travel could be possible by "latter part of summer"
Everything you can do from tomorrow as biggest easing of restrictions in months to take place
QUIZ: Can you identify the EU country of origin from these €1 coins?
The JOE Movie Quiz: Week 101
The JOE Music Quiz: Week 56
QUIZ: Can you identify which of these countries have the colour blue in their flag?
You may also like
3 months ago
Nike release first pair of hands-free runners
7 months ago
QUIZ: Do you know the names of these classic trainers?
1 year ago
Nike has created a pair of shoes specifically for nurses, doctors and other health workers
1 year ago
WATCH: Irish filmmaker directs brilliant new Nike ad
2 years ago
Nike unveil new self-lacing shoes that are operated via smartphone
2 years ago
Nike's online sales soar following the Colin Kaepernick campaign
Next Page