Who can blame him?

Northern Ireland's Kyle Lafferty is used to leading the line for Michael O'Neill's men but it seems like the striker was also leading the celebrations after his side qualified for their first major tournament since 1986.

The Norwich striker has scored four crucial goals during the qualification campaign for Euro 2016, but he got into party mode very soon after clinching a place at France next summer. 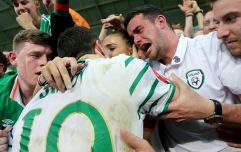 END_OF_DOCUMENT_TOKEN_TO_BE_REPLACED

I absolutely love the fact that he started the post-match interview with beer in hand, but after a 30 year wait, who can blame him?

In fairness he does try to keep a certain level of decorum when asked about the early flight to Finland for the final qualifying game, talking about getting an early night, but he just can't keep a straight face.

Take a look at his answer and the absolute soaking that Sky's reporter gets afterwards.

The Big Reviewski || JOE · TBR Spotlight: The Falcon and the Winter Soldier Episode Four - 'The Whole World is Watching'
popular
Beware of the very clever WhatsApp hack that is locking Irish users out of their accounts
Reeling in the Years was watched by over half a million people last night
Staff shouldn't be pressured to return to workplaces says Leo Varadkar
Motor insurance costs set to fall from June after changes to payout guidelines
Why John Corbett probably isn't Jo Davidson's mystery relative in Line of Duty
Line of Duty fans think they've worked out who Jo Davidson's mystery relative is
Stephen Donnelly responds to inquest into his lack of Twitter mentions
You may also like
3 years ago
FAI release never-before-seen footage of Wes Hoolahan’s most famous goal in retirement tribute
3 years ago
PIC: Man gets tattoo on his arse to commemorate that famous Robbie Brady goal
3 years ago
QUIZ: Name the Ireland team that played Sweden at Euro 2016 inside ONE minute
4 years ago
PICs: Shane Long's wonderful gesture to young fan after Euro 2016 defeat has only just been revealed
4 years ago
VIDEO: People were united in their love for Two Shades of Green on RTÉ
4 years ago
This documentary on RTÉ 2 tonight could be the most unmissable show of the Christmas period
Next Page