Video: On the day the UFC turns 20 let’s celebrate with their top 5 KOs

It was 20 years ago today that UFC 1 took place. Here’s the top 5 KOs, according to the UFC themselves.

On November 12, 1993, UFC 1 took place at McNichols Sports Arena in Denver, Colorado. Intended as a one-off event to see which sort of martial arts fighter was better nobody knew that it would, eventually, grow into the massive sporting organisation it is today.

Twenty years on the sport of MMA continues to grow in popularity and scope, with many other competing promotions pushing  it from the margins to prime time.

END_OF_DOCUMENT_TOKEN_TO_BE_REPLACED

But UFC remains the daddy of the sport and to celebrate it’s 20th birthday, they selected their top 20 KOs of the past two decades. We’ve pulled out the Top 5 here for you, but you can check out the rest right here.

And if you don’t agree with the list, or the joint No 1s, take it up with Dana White, not us.

END_OF_DOCUMENT_TOKEN_TO_BE_REPLACED

Gonzalez puts head kick specialist Cro Cop out cold with, you guessed it, a vicious head kick at UFC 70, 2007 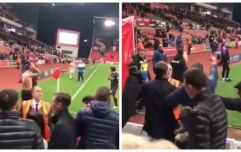 END_OF_DOCUMENT_TOKEN_TO_BE_REPLACED

1 (B). Chris Weidman on Anderson Silva

A KO longed for by many fans, Silva’s antics were finally punished by Weidmann at UFC 162 in July

1 (A). Anderson Silva on Vitor Belfort

popular
The "eighth best movie ever made" is among the movies on TV tonight
Jennifer Lawrence sparks controversy by saying she was the first woman to lead an action movie
One of the best films of all time is among the movies on TV tonight
The start of the superhero takeover of Hollywood is among the movies on TV tonight
QUIZ: JOE’s Big News Of The Day Quiz #27
Met Éireann updates weather warning for entire country as temperatures set to fall to -6
Mia Khalifa claims seaside town is better than Miami
You may also like
1 week ago
These are the 10 most-watched YouTube videos in Ireland in 2022
5 months ago
Doctor reveals why couples should always sleep in separate beds
1 year ago
"Only in Dublin" - Viral clip sees three men remove sofa from window with sweeping brushes
1 year ago
Kids pull "Bart Simpson" style prank on school board in brilliant viral clip
1 year ago
WATCH: The incredible lengths this Irish dad is going to for his "miracle" daughter
3 years ago
WATCH: TV Presenter Mairead Ronan tries to guess the mystery car
Next Page