Well, this is awkward.

"How can you put your only Champions League winner on the bench?" is what Owen Hargreaves muttered to his BT Sports colleague tonight.

The narky comment was about Louis van Gaal leaving Michael Carrick on the bench for Manchester United's game with Wolfsburg.

The problem for Owen is that he didn't realise he was live on TV at that very moment. Watch the clip here.

The exact moment he realised he was live on air. 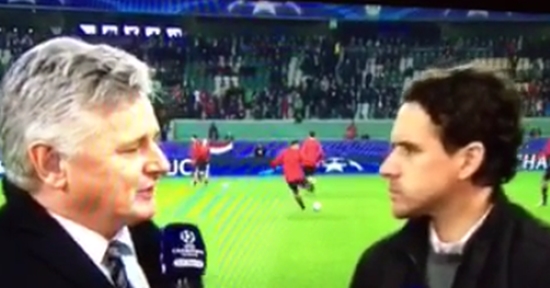 By the way, Juan Mata and Bastian Schweinsteiger are starting and they have won the Champions League before. Eek.

popular
Patient arrested after switching off roommate's ventilator because it annoyed her
Peter Kay moved to tears on stage while opening his first stand-up tour in 12 years
Dancing with the Stars has added a very surprising contestant
Winter warning issued as "severe" week of cold weather in store for Ireland
'America's Unknown Child' identified solving mystery after 65 years
U2 drummer Larry Mullen Jr. says band may perform without him in 2023
Ireland sees '100% success rating' with four-day work week trial
You may also like
6 months ago
BBC trainee accidentally posts message mocking Man United live on TV
1 year ago
COMPETITION: WIN a copy of Eric Cantona's new Manchester United documentary, The United Way, on DVD
1 year ago
Manchester United documentary written by Eric Cantona available to watch at home in Ireland this May
2 years ago
Marcus Rashford launches book club to help kids experience 'escapism' of reading
2 years ago
Paul Pogba releases powerful statement in response to 'fake news' from The Sun
2 years ago
The JOE Pub Quiz: Week 214
Next Page