Video: Ronda Rousey responded wonderfully to people claiming her body is too masculine

Ok, this is a couple of days old but it deserves an article...

Ronda Rousey scares us, there's no point lying about it, but at the same time we're completely head over the heels for her badass attitude.

In a recent UFC Embedded episode for UFC 190 which takes place in the wee hours of the morning on Sunday in Brazil, Rousey addressed some of the comments levelled at her appearance about her being too "muscly", "masculine" or "huge".

END_OF_DOCUMENT_TOKEN_TO_BE_REPLACED

Speaking on the video, she had some choice words for those who criticise her body...

"Listen, just because my body was developed for a purpose other than f*cking millionaires doesn’t mean it’s masculine.

"I think it’s femininely badass because there’s not a single muscle on my body that isn’t for a purpose, because I’m not a do nothing bitch.

"It’s not very eloquently said, but it’s to the point and maybe that’s just what I am."

END_OF_DOCUMENT_TOKEN_TO_BE_REPLACED

We have to agree with Ronda on this one, partly because she is 100 per cent correct and partly because we're afraid she'd find us if we said otherwise.

But we don't think a girl that looks like this can be considered too masculine... 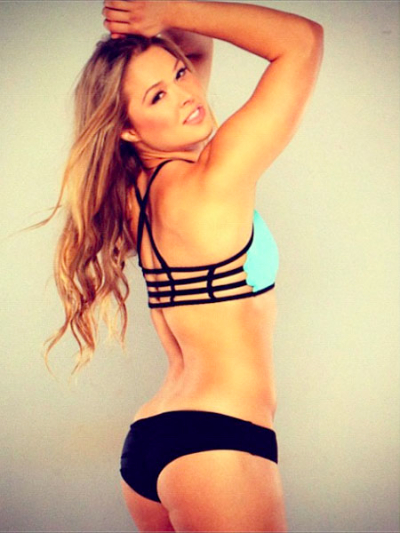 popular
One of the best movies of the decade has just been added to Netflix
Cristiano Ronaldo 'agrees £173m-a-year deal' with Saudi club
Country singer Jake Flint, 37, dies in his sleep just hours after his wedding
20 years ago, one of the best sci-fi movies of the 21st century was a box-office bomb
Katherine Ryan says famous TV star is a ‘predator’ and everyone in industry knows
U2 drummer Larry Mullen Jr. says band may perform without him in 2023
Surprise frontrunner emerges as potential next James Bond as producers 'love him'
You may also like
5 months ago
Doctor reveals why couples should always sleep in separate beds
1 year ago
"Only in Dublin" - Viral clip sees three men remove sofa from window with sweeping brushes
1 year ago
Kids pull "Bart Simpson" style prank on school board in brilliant viral clip
1 year ago
WATCH: The incredible lengths this Irish dad is going to for his "miracle" daughter
3 years ago
WATCH: TV Presenter Mairead Ronan tries to guess the mystery car
3 years ago
WATCH: Mick Wallace's campaign video is unnervingly intense
Next Page