Video: The League of Ireland closing montage is here and we pick our best XI and moments from 2013/14

The League of Ireland season came to a close on Sunday as St Patrick's Athletic ended their 53-year FAI Cup hoodoo with a memorable 2-0 win against Derry City.

The 2013/14 campaign was also a memorable one for Dundalk also as they lifted the title for the first time in almost 20 years with a dramatic final day win over Cork City, while Stephen Kenny's side also won the EA-Sports Cup against Shamrock Rovers.

END_OF_DOCUMENT_TOKEN_TO_BE_REPLACED

It was a poor season by Sligo Rovers' usual high standards but they also gave Ian Baraclough some parting silverware, beating Dundalk in the Setanta Cup final.

There have been some cracking matches in the league this season and we've already discussed the qualities of some of the players in the league who we think can seriously push on in their careers.

END_OF_DOCUMENT_TOKEN_TO_BE_REPLACED

JOE's Goal of the Season: There have been some outstanding efforts as seen in this video below but we have to give it Chris Forrester, we reckon the only reason he didn't win it was because it wasn't 'aesthetically' pleasing enough.

It's a volley from 40 yards out for God's sake.

JOE's Player of the Year: Christy Fagan was brilliant but  we have to go for Richie Towell who proved to be the creative catalyst for Dundalk's double winning team and chipped in with 11 league goals in an ever present campaign.

JOE's Moment of the Year: Bohemians fans cleaning up the vandalised Liam Whelan Bridge which prompted a lovely outpouring display of emotion from the football community.

Best Match: Cork City 1-2 Dundalk - A pivotal turning point in the title and people leaving the ground had a feeling that Brian Gartland's 85th minute winner would prove to be important. Just how important would be revealed later on in the season.

JOE's Farce of the Year: Take your pick between Roddy Collins' infamous rant at a Derry journalist or the Dublin derby between Bohs and Shamrock Rovers being called off due to an 'unplayable' pitch.

JOE's Picture of the Year: It has to go to the rather brilliant Brian Kerr embracing Liam Buckley after Pats won the FAI Cup Final.

JOE's League of Ireland Team of the Year...

Cork City only conceded 25 goals all season, just one more that champions Dundalk, which is an incredible return from their defence.We've opted for McNulty because we think he was busier than Peter Cherrie and his shot stopping, distribution and command of his box has impressed us.

We love the reaction from the crowd after this penalty save against Sligo Rovers.

The glaring omission from the Soccer Republic best XI and we don't know why. Simon Madden is a fine player but the marked improvement in Gannon's all-round game is huge.

The full-back has become more sound defensively and comfortable going forward with the ball during his time at Oriel Park and is probably the most improved player in the league.

He also scored one of the goals of the season.

The best defender in the league this year and it's noticeable that at the young age of 23 , Boyle seems to be playing with the experience of someone much older than him.

Brave, physical and dominant he lead Dundalk superbly in the absence of their injured captain Stephen O'Donnell and along with Brian Gartland, he has helped forged the best defensive partnership in the league.

Boyle was so good that he got booked twice in the one game against UCD and still managed to play on. Class. 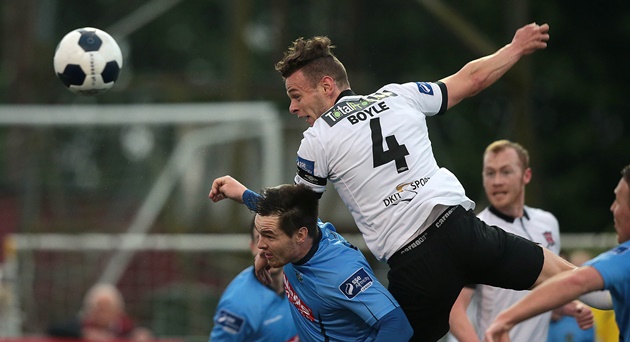 The younger of the Dennehy brothers has taken a massive step-forwards in his career under John Caulfield and has become one of the first names on City's teamsheet.

Dane Massey was superb for Dundalk but we're massive fans of Pat's marauding and always consistent left-back Ian Bermingham. The Saints problems this season we're mainly in the centre-back position but their left-back is still the best left sided defender in the country mainly because he plays like a winger.

Darren Meenan had an astonishing amount of assists but Byrne's 18 goals from midfield is absolutely superb and this doesn't even do the winger justice. He constantly provides an out-ball for the Saints wonderful array of passers but he also works his socks off defensively.

On a personal level this was his best season in the League of Ireland and Liam Buckley should be looking to tie him up to a new deal very soon.

There have been times when the former Cetltci and Hibernian man has looked one or two classes above his rivals on the field. Towell's has that rare ability to look like he has more time on the ball than most and his passing, assists and goals have been a massive factor in Dundalk's double.

He has recently went away to Cardiff City for a trial match so it looks increasingly unlikely that Stephen Kenny will be able to hold onto his prized asset.

While this JOE thinks Greg Bolger is undoubtedly the best holding midfielder in the country, his performance in the cup final alone was superb, it's almost impossible to overlook the driving influence that Healy had on Leeside.

The former Celtic, Sunderland, and Ipswich player is an excellent reader of the game, assured passer of the ball and a natural leader on the pitch. Cork fans will probably say that they overachieved this year but if they manage to keep Healy then his experience can only help the younger players like Gearoid Morrisey and Garry Buckley around him. 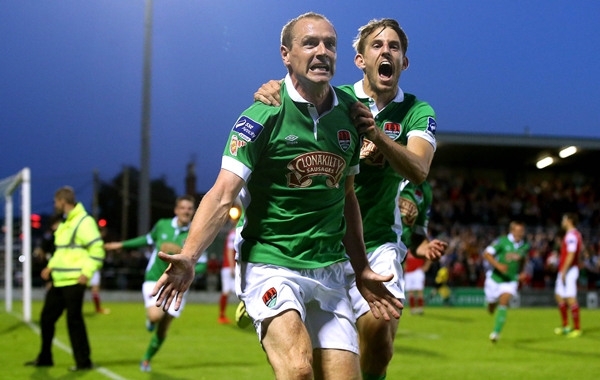 The Dundalk and Irish U-21 international is just incredibly direct, powerful and tricky when taking on a defender and his move to Dundalk was fully justified with a league winners medal.

The winger is still only 22 so we expect him to get even better.

The former Man Utd trainee is the archetypical penalty-box predator is undoubtedly the best striker in the league because his quick movement and uncanny ability to be in the right place in the box at the right time is unmatched.

It's testament to Fagan's high standards in front of goal that he had a poor cup final against Derry City by was still the man of the match. 20 league goals is an incredible return as without him Pats would have seriously struggled.

Dundalk were a joy to behold this season as the Lilywhites scored an incredible 73 league goals this season and Hoban was responsible for 20 of them.

So after all the goals, drama, tears, cheers and trophies here is how the 2013/14 League of Ireland season looked. Friday nights won't be the same until February.