Video: This guy decided to film himself doing pull ups but it does not go as planned

This sounds bad, but we really enjoyed this fail.

There must be some little fairy watching over the world, and when that fairy sees people working out and recording it on their phone, they magically leap into action and teach said person a lesson.

We're most certainly not fans of the vanity, although we are a fan of 'curls for the girls', but only in the sanctity of our own homes and with the blinds firmly shut. 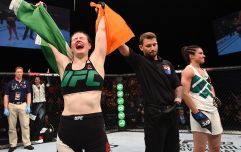 END_OF_DOCUMENT_TOKEN_TO_BE_REPLACED

This guy tried to film himself while doing pull ups and to say that didn't go to plan is a bit of an understatement, it can only be classified as an epic fail.

This clip has been around for a while but it is only starting to go viral now, take a look at it below and prepare your evil laugh...

popular
Patient arrested after switching off roommate's ventilator because it annoyed her
Winter warning issued as "severe" week of cold weather in store for Ireland
Peter Kay moved to tears on stage while opening his first stand-up tour in 12 years
20 years ago, one of the best sci-fi movies of the 21st century was a box-office bomb
'America's Unknown Child' identified solving mystery after 65 years
New trailer for the Last of Us TV show is one of the best we've ever seen
Simon Cowell concerns fans with appearance as they 'don't recognise him'
You may also like
1 year ago
COMPETITION: Win €250 worth of cool gear from the Gym+Coffee autumn/winter collection
1 year ago
FLYEfit to open four new 'super gyms' as part of €10 million expansion
1 year ago
COMPETITION: WIN a 1 year free subscription to WHOOP to help smash your fitness goals
1 year ago
5 really simple ways to help boost your immune system
1 year ago
Dublin Marathon cancelled for second year in a row
1 year ago
Popular gym supplement found to be ineffective at building muscle
Next Page