Video: This is why you should always follow your own path when mountain biking downhill

We can understand why people taking part in downhill mountain biking would follow the path tread by those in front of them; potential obstacles can be flagged by riders ahead and if anyone is going to fall and get hurt, it’s more likely to be the guy at the front of the pack. 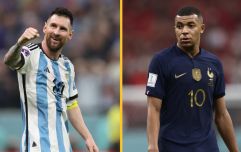 END_OF_DOCUMENT_TOKEN_TO_BE_REPLACED

It was a strategy that failed spectacularly for four Argentinean cyclists in Chatel in France recently, however, when the leading rider followed a path that veered spectacularly off course and was quickly followed by his three colleagues, all of whom ended up suffering the same painful consequences.

The footage was captured by the second of the four cyclists on a GoPro camera and the cries of pain by all four are pretty audible too; at least they were able to laugh at themselves afterwards, no doubt they won’t be as quick to follow the leader in future.

popular
Harvard study reveals how many times men should ejaculate each month to stay healthy
Parents left in shock after gorillas start mating in front of kids at zoo
Colin Farrell shouldn't win the Oscar this year
Conor Mcgregor hit by car ‘at full speed’ while cycling
Man wins $1m on lottery ticket after someone pushed in ahead of him in queue
The JOE Friday Pub Quiz: Week 331
Close call as Paul McCartney tries to pose on Abbey Road crossing
You may also like
3 months ago
TV show puts people with unusual laughs together – and it's hilarious
5 months ago
Eurotunnel passengers made to walk following train breakdown below English Channel
6 months ago
Gardaí head to France to track down new Sophie Toscan du Plantier suspect
1 year ago
Macron wants to "piss off" the unvaccinated
1 year ago
Over 65s in France without booster will lose Covid pass
1 year ago
France to ban plastic packaging for fruit and vegetables from January 2022
Next Page