The BMX rider Ryan Williams recently landed a world first ‘front-flip into forward bike flip’ and it’s quite possible one of the coolest BMX tricks we’ve ever seen.

When the guys at Nitro Circus do something, they make sure to do it big and there was certainly no exception for their recent European Tour.

One of the biggest tricks to be landed throughout the tour was this absolutely epic ‘front-flip into forward bike flip’ by the Aussie scooter pro Ryan Williams. 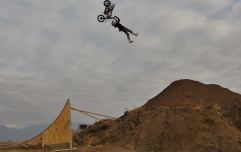 END_OF_DOCUMENT_TOKEN_TO_BE_REPLACED

Here’s what Nitro Circus had to say on YouTube: “Throwing down almost a dozen different world firsts including the Silly Willy, laid out double front-flips, front flip scooter flips, and a whole bunch more, R-Willy has proven to be one of the most talented action sports athletes on the planet, as well as the world's best scooter rider.

“However, scooters aren't all he rides. He's also an extremely skilled BMXer, hucking down tricks that most people wouldn't even dream of throwing off the 50-foot high Nitro Gigant-A-Ramp.

popular
Very popular US fast food chain planning to open in Ireland
20 years ago, one of the best sci-fi movies of the 21st century was a box-office bomb
Katherine Ryan says famous TV star is a ‘predator’ and everyone in industry knows
The JOE Movie Quiz: Week 181
Surprise frontrunner emerges as potential next James Bond as producers 'love him'
QUIZ: Only the sharpest will get 100% in this General Knowledge test
The JOE Friday Pub Quiz: Week 322
You may also like
8 years ago
Spoke-tacular… Check out these mind-blowing bike stunts
9 years ago
Experience a show to remember at Nitro Circus Live
1 week ago
Joe Lycett reveals email to David Beckham following Qatar ambassador backlash
1 week ago
Qatar bans all alcohol at the World Cup
1 week ago
Qatar 'want to ban alcohol' at World Cup stadiums 48 hours before tournament kicks off
1 week ago
Going to Qatar for the World Cup? Here's how much a beer will cost you, and it ain't cheap...
Next Page