Even the Shanghai World Financial Centre, the building that looks like a bottle opener, looks tiny in comparison to the height that the two lads eventually climb. 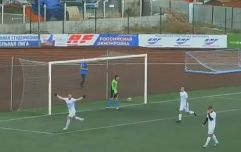 WATCH: This penalty effort from the Russian League needs to be seen to be believed

END_OF_DOCUMENT_TOKEN_TO_BE_REPLACED

After reaching the top of the building the two daredevils in question, Vadim Makhorov and Vitaliy Raskalov, go one step further by climbing the crane that sits atop of the Shanghai Tower. In total, the pair climbed a whopping 650 meters.

The stomach churning, foot tingling, vertigo inducing action kicks off around the 1:30 mark.

popular
The long-awaited MetroLink is finally happening, for real this time, honest
Waterford man sentenced to three months imprisonment for operating "cruel and illegal" puppy farm
Netflix has just added 33 very big movies to its library
The full list of cancelled flights in and out of Dublin Airport on Monday (so far)
QUIZ: Can you guess the crisps from the pixelated packet?
One of the coolest movies of recent years is now available to watch at home
QUIZ: It's time for one of our trickiest General Knowledge Quizzes yet
You may also like
4 days ago
Russia leaves Snake Island where guards told warship "go f*** yourself" months ago
1 week ago
WATCH: J.K Rowling tricked by Russians impersonating Zelensky on Zoom call
1 month ago
"Rocky" years ahead for consumer energy prices in wake of Russian oil ban, warns Taoiseach
1 month ago
Morgan Freeman has been banned from entering Russia
1 month ago
"We're not intimidating anyone" – Russian State TV fires back at Taoiseach's apology request
1 month ago
Elon Musk claims he's being threatened by Russia over supplying internet to Ukrainians
Next Page