Video: Watch this incredible footage of guys doing acrobatics on a seesaw

We're big fans of YouTube sensation devinsupertramp and his videos have been causing quite a stir...

We recently featured the simply incredible videos of the freestyle basketball and the breath-taking footage of the world’s largest urban zipline, and the tramp himself has followed it up with this pretty impressive series of acrobatics on a teeterboard… although we prefer to call it a seesaw.

But when we say see-saw we mean a seesaw that obviously went off the rails on some steroids and now it's completely unrecognisable from the original seesaw… if that makes sense? Sure it does. 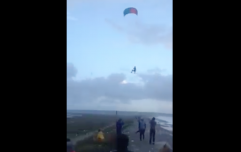 END_OF_DOCUMENT_TOKEN_TO_BE_REPLACED

While this video is not as impressive as some of his other efforts, namely the Assassin’s Creed free run through Paris, you still have to admire the skill and technique required to pull off such feats of flexibility.

For our grand finale, we're aiming to fit in as many flip and see-saw puns as possible in the closing lines but, to be fair, it is flippin’ difficult to think of any worthwhile jokes. Yes, we know that was an awful pun, please accept our apologies.

If we think of anymore in the meantime we'll be sure to add them in or, alternatively, you can add your own puns in the comments underneath and then we'll steal them and pretend they were our idea…

popular
Simon Cowell concerns fans with appearance as they 'don't recognise him'
Orange is the New Black actor Brad William Henke dead aged 56
Miss Croatia wears revealing outfit at World Cup game despite Qatar's dress code
Netflix has just added 30 big movies to its library
Bad Sisters stars snap back at New York Times article that called them British actors
Temperatures set to drop to freezing this weekend as Christmas predictions emerge
Junior doctor 'fell asleep' at the wheel after 12-hour shift then mowed down two women and two kids
You may also like
4 years ago
This new action thriller has the greatest movie title of all time
7 years ago
Pic: Stunning NASA photo shows off the dark side of the moon
7 years ago
Pic: Guy's great gesture to Irish girl goes viral in one of the nicest stories of the week
7 years ago
Video: Man spends 4 years chasing celebrities to help with his fantastic marriage proposal
7 years ago
Video: A motorbike and ATV drift around a frozen lake in this incredible display of driving
7 years ago
Video: Skier's brilliant first-person ski run through a mountain ridge is absolutely breath-taking
Next Page