It was Paddy's Day and Ireland had just won the Six Nations, so how could Sheamus possibly mark the occasion for all his fans in America and around the world? With a tribute to the great Brian O'Driscoll, of course.

The WWE superstar came down the ramp last night sporting an Irish rugby jersey with BOD and the number 13 printed on the back, giving his own nod to one of the greatest to ever play the game.

Happy #StPatricksDay from @WWE #Raw paying respect to the man himself @BrianODriscoll... pic.twitter.com/kqkIAf3Opo 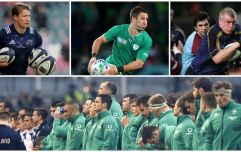 END_OF_DOCUMENT_TOKEN_TO_BE_REPLACED

No surprise then that even JBL on the commentary desk knows who O'Driscoll is, and good to see that he's recognised on the other side of the Atlantic too. Maybe there's a career in it for him once his season with Leinster finishes up as Sheamus' tag partner...

Hat-tip to Stephen Minihane for sending this our way

popular
The JOE Friday Pub Quiz: Week 307
Thunderstorms and heavy rain to end Ireland's current heatwave
Record for hottest August day in Ireland ever has now been broken
A great underseen action thriller is among the movies on TV tonight
Anne Heche dies one week after car crash, aged 53
Shooting stars set to light up Ireland's skies this weekend
Netflix has just added an incredibly tense 97-minute thriller
You may also like
6 years ago
PIC: The Ireland team to play Italy in the Six Nations on Saturday has been named
6 years ago
GALLERY: The best photos of England v Ireland at Twickenham over the years
6 years ago
Twitter reacts as France beat Ireland in the Six Nations
6 years ago
The Ireland team to play France at the Six Nations this weekend has been announced
6 years ago
JOE's bluffer's guide to Ireland's 2016 Six Nations opponents
7 years ago
Video: Paul O'Connell's best moments during Ireland's 6 Nations win
Next Page