WATCH: Derval O'Rourke's views on the Pat Hickey ticket scandal are a must watch

After Pat Hickey's temporary resignation, the RTÉ Sport pundit has called for a full investigation into the ticketing scandal that has deflected some of the attention away from the Ireland's dedicated athletes in Rio. 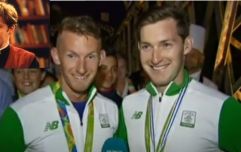 END_OF_DOCUMENT_TOKEN_TO_BE_REPLACED

In an articulate and accurate interview, the former world indoor champion states that athletes are "held to the highest standards for everything and we’re very accountable, we're very answerable". The sprint hurdler from Cork also noted that "most athletes earn very little money, they do it for the love of the sport. The least you can expect is integrity and honesty from the people who are the gatekeepers of the sport."

The Big Reviewski || JOE · The Big Reviewski with Dune, a mini-Hangover reunion & the best of Timothée Chalamet
popular
One of the best thrillers of the decade is among the movies on TV tonight
The JOE Movie Quiz: Week 125
"Like a whip" – director describes fatal shooting on Alec Baldwin film set
QUIZ: Get the ball rolling with this General Knowledge Quiz
The full list of all the new shows and movies coming to Netflix in November
A brilliant, under-seen Graham Taylor documentary is on TV tonight
The JOE Friday Pub Quiz: Week 266
You may also like
5 years ago
PICS: Great scenes as thousands gather to welcome home Olympic silver medalist Annalise Murphy
5 years ago
Ryan Lochte has issued a statement after the Rio robbery scandal
5 years ago
Pat Hickey has been denied bail
5 years ago
WATCH: Foil, Arms and Hog's skit on the Michael Conlan fiasco is just perfect
5 years ago
WATCH: This Japanese wrestler had the best reaction in Rio after winning Olympic gold
5 years ago
Thomas Barr had a quintessentially Irish message to all his supporters
Next Page