WATCH: Donncha O'Callaghan on the perks of rooming with Ronan O'Gara

Brought to you by TV3.

All Ireland internationals are equal, but some are more equal than others.

When Donncha O'Callaghan started rooming with Ronan O'Gara in Ireland camp, he soon realised there were some advantages.

When legendary kitman Rala O'Reilly was in charge, ROG and then Ireland captain Brian O'Driscoll wanted for nothing - as O'Callaghan explains on tonight's episode of The Clubhouse on TV3 (10.30pm).

"Everyone else had to have their laundry down by 3 o'clock or 5 o'clock and it was just thrown out and you had to find your socks," said the former Munster lock.

Rala is a guest on next week's episode of The Clubhouse, so be sure not to miss that. 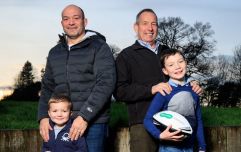 END_OF_DOCUMENT_TOKEN_TO_BE_REPLACED

"I went to that game and it was medicine. I would have done anything to play in that game, and so would Denis Leamy, John Kelly, any of those guys. I think it was such a big emotional week and the only thing that galvanised and brought us all together was that match.

"You felt so nervous for that group of lads and how they went out and reflected the whole lot of us, I was just bursting with pride.

"After the match, I don't know what happened, I just ended up in the dressing room, hugging guys and just thanking them. Afterwards I was embarrassed, just asking 'What are you doing, man?'"

The next episode of The Clubhouse will be aired on TV3 at 10.30pm tonight.


popular
5 new additions to Netflix to spend your weekend watching
WATCH: Paul O’Connell provides the single greatest moment in the history of A Question of Sport
Orange Order confirms cancellation of Twelfth of July parades
QUIZ: We give you the theme song, you tell us the TV show
The JOE Movie Quiz: Week 46
This Irish raffle is giving you the chance to win a €250,000 Ferrari
A five-year-old boy has died in a farming accident in Roscommon
You may also like
3 weeks ago
FAI and Irish Rugby suspend all related activities with immediate effect
4 months ago
SportsJOE presents The Great Debate
5 months ago
WATCH: Players from Cavan RFC give our Ice Bath Quiz a go
5 months ago
The perfect night out for rugby fans looking to get over that World Cup heartache
5 months ago
WATCH: Players from Loughrea RFC have a go at the Ice Bath Quiz
6 months ago
WATCH: Balbriggan RFC players take the Ice Bath Quiz
Next Page