Saturday marks the start of the 2017 Six Nations and with Joe Schmidt’s side in pretty fine fettle going into the tournament, Irish rugby fans would have travelled to Edinburgh in optimistic mood on Friday afternoon.

The mood of fans on board flight EI3254 was made even better when the Captain made a special announcement shortly into the flight. 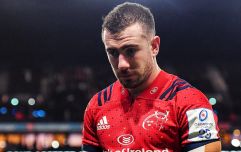 END_OF_DOCUMENT_TOKEN_TO_BE_REPLACED

Although the tone was similar to what airline passengers are well used to hearing, the messages being relayed by the Captain were a little bit different, sounding suspiciously (exactly) like the words of a song that will hopefully be heard at Murrayfield on Saturday.

It took some of the fans a few seconds to get it, but when they did, at least a few of them tried to muster up a song in response; fingers crossed it will ring a bit louder on the back of a fine Irish performance on Saturday afternoon.

House of Rugby Ireland · Munster can't beat Leinster, Six Nations squad and John Cooney interview
popular
Holly Willoughby criticises influencer for travelling to Dubai during pandemic
QUIZ: Can you name all of these countries just from one of their cities?
Status Yellow rain warning issued for 12 counties
Here are the best movies on TV tonight
New Zealand set to close its borders for the entirety of 2021
Leo Varadkar says if Ireland introduced mandatory hotel quarantine, it would have to do so for a year
Five things we definitely do not want to see in the new Harry Potter TV series
You may also like
2 weeks ago
Cardiff conversation that proved Paul O'Connell always put the team first
4 weeks ago
Ian Keatley on Ronan O'Gara's deadpan advice and his most treasured Munster jersey
1 month ago
Springboks legend must have the greatest jersey swap collection in rugby
1 month ago
'Players, after games, are reading the most toxic stuff being written'
2 months ago
Johnny Sexton made a class post-match gesture after Ireland's win over Wales
2 months ago
Former England star Ugo Monye opens up on harrowing experience with racism
Next Page