Ah, we'll let him away with this one, shall we?

Jeff Stelling, during today's Gillette Soccer Saturday, borrowed on of Ireland's midfielder's for the empire today but we're thinking we'll let it slide. It didn't sound like he really meant it. Besides, we like Jeff. 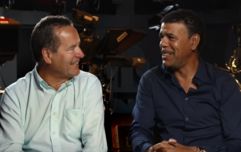 END_OF_DOCUMENT_TOKEN_TO_BE_REPLACED

The same Glenn Whelan who was born in Dublin and has 73 caps for Ireland...

popular
The JOE Friday Pub Quiz: Week 307
WATCH: Flight makes scary 'lowest ever landing' at Greek airport, narrowly avoiding plane spotters
Danny Healy-Rae insists the Puck Fair goat is safe and well looked after
Netflix has just added an incredibly tense 97-minute thriller
Shooting stars set to light up Ireland's skies this weekend
Actress Anne Heche "not expected" to survive coma following car crash
A great underseen action thriller is among the movies on TV tonight
You may also like
5 years ago
Something tells us Jeff Stelling and Chris Kamara were very surprised by their trip to the Aran Islands
5 years ago
#TheToughest: Is there anything Gaelic football should take from soccer?
5 years ago
WATCH: Someone really needs to tell Jeff Stelling and Paul Merson that Harry Arter plays for Ireland
5 years ago
Every football fan can sympathise with Jeff Stelling's reaction to Hartlepool's woes
6 years ago
Jeff Stelling: Friday Night Football with Rachel Riley will have 'lighter touch'
7 years ago
Video: Jeff Stelling reacts to a day of shock in the FA Cup
Next Page