How's that for nostalgia?

This week's Monday Night Raw saw one of the biggest wrestlers of the '90s make an explosive return to the squared circle.

It's been 12 years since Goldberg last set foot inside a WWE ring, but when Brock Lesnar challenged the 49-year-old to a match at next month's Survivor Series, it was clearly too good an opportunity for him to pass up. 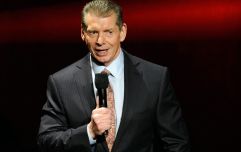 END_OF_DOCUMENT_TOKEN_TO_BE_REPLACED

Goldberg's inclusion in newly-released video game WWE2K17 meant his comeback came as no great surprise, but watching the former WWE and WCW World Heavyweight Champion make such a triumphant and emotional entrance after so many years out of the game sent fans into meltdown.

END_OF_DOCUMENT_TOKEN_TO_BE_REPLACED

His brief stint in the WWE was memorable in itself, but Goldberg's 173-0 undefeated streak in WCW singles competition may well never be surpassed.

His final appearance in the WWE came after beating Brock Lesnar at WrestleMania XX, in a match refereed by Stone Cold Steve Austin. His parting gift from The Texas Rattlesnake was a Stone Cold Stunner. How friendly.

Whether a rematch of that controversial 'Mania bout will actually be any good is anyone's guess, but the reception the iconic wrestler received from the current roster of Raw Superstars, who lined up to applaud him as he made his way to the ring, showed that his return is a welcome one.

popular
Amazon Prime Video has just added 21 big movies to its library
Here is a list of every Bank Holiday in Ireland in 2023
The 50 most iconic songs of all time* have been revealed
One of the best crime thrillers ever is among the movies on TV tonight
Netflix has just added one of the best sci-fi movies of recent years
Mark Hamill on the one piece of dialogue he got removed from the original Star Wars
Teenager killed in shark attack after swimming with dolphins in Australia
You may also like
1 week ago
Wrestling legend Hulk Hogan 'paralysed from the waist down'
4 months ago
WWE Tough Enough winner Sara Lee has died, aged 30
5 months ago
A charming wrestling comedy – yes, they exist – is among the movies on TV tonight
6 months ago
Logan Paul pulled off a high-flying move that left fans stunned at Summerslam
6 months ago
WWE boss Vince McMahon says he's finally retiring – others aren't so sure
7 months ago
Vince McMahon steps back as WWE CEO amid probe into alleged misconduct
Next Page