WATCH: Needless to say, James McClean's goal is even better with the Titanic theme song

He's the king of the world!

That run. That cross. That dummy. 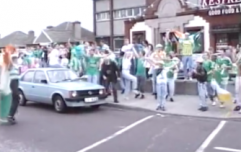 END_OF_DOCUMENT_TOKEN_TO_BE_REPLACED

Ireland's World Cup dream is very much alive after James McClean's winner sent the Boys in Green into a play-off next month.

Before we let the nerves build up, and up, for what's bound to be the most tense two nights of the sporting year in November, we need to watch McClean's goal - with the Titanic theme - on repeat many, many times.

popular
A classic Western is among the movies on TV tonight
One of the most underrated sequels of all time is among the movies on TV tonight
The JOE Friday Pub Quiz: Week 300 - the Triple Century
Met Éireann gives update on weather warnings for this weekend
An underrated Jason Statham thriller is among the movies on TV tonight
The content warning for this week's episode of The Boys is incredible
The 50 most iconic songs of all time* have been revealed
You may also like
4 years ago
These are the 9 agonising stages of being an Ireland fan
4 years ago
QUIZ: Can you name every member of Ireland's 2002 World Cup squad?
4 years ago
Ireland show serious faith in Martin O'Neill with contract extension
5 years ago
VIDEO: How is this man not playing in the Premier League?
5 years ago
Retiring Keane named in squad v Oman; O'Neill also names panel for Serbia clash
6 years ago
This open letter from a French supporter to Ireland will lift today's gloom
Next Page