WATCH: The O'Donovans' interview following their race was once again hilarious

These two are some characters...

Paul and Gary O'Donovan are the new heroes of the Rio Olympics as they claimed a silver medal in a fantastic performance in the men’s lightweight double sculls final.

The reaction to their win was fantastic around the country as people heaped praise on the pair for sticking to their word and pulling like dogs. 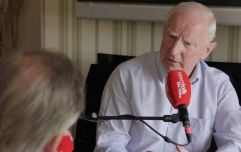 END_OF_DOCUMENT_TOKEN_TO_BE_REPLACED

Their interviews during the week were good but we think that their latest one is even sweeter because they've now got a silver medal to take home with them from Rio.

The pair of legends, who are now afraid to go home because Michael Conlan said he'd box the head off them if they didn't win gold.

We think he will hit them, but it'll be a very firm pat on the back for their tremendous achievement...

popular
International travel won't resume until August "at the earliest", says Leo Varadkar
Ryanair set to take first delivery of "Gamechanger" aircraft this month
RTÉ to seek additional voluntary redundancies after 87% of staff reject salary cuts
The JOE Movie Quiz: Week 102
Here are the restrictions being eased today as Ireland continues reopening
The 50 most iconic songs of all time* have been revealed
Ice-cream shop owner issues 99 warning amid "worldwide shortage" of flakes
You may also like
3 years ago
Pat Hickey: "The €1.5 million was done without my knowledge, I know nothing about it."
4 years ago
WATCH: The O'Donovan brothers were in cracking form on Graham Norton's New Year's Eve show
4 years ago
Pat Hickey is reportedly on his way back to Ireland
4 years ago
Pat Hickey receives loan to pay bail in Brazil and return home to Ireland
4 years ago
Pat Hickey to have passport returned and allowed to leave Brazil
4 years ago
John Delaney releases statement after stepping down from OCI Executive Committee
Next Page