Will Addison on the Joe Schmidt call that changed his life

‘Jesus, this looks incredible. I think I need to chance my arm at going over’.

11 appearances in for Ulster and Will Addison has found a home, and appreciative fanbase. In truth, he had it after his first outing for the province.

END_OF_DOCUMENT_TOKEN_TO_BE_REPLACED

Will Addison made his Ireland debut, two months after his first game for Ulster, in November against Italy at Soldier Field, Chicago. If it seemed he was fast-tracked to the Test set-up, Addison's debut was almost six years in the making.

The former England U20 star's mother is from Fermanagh and former Sale teammates Cillian Willis and Tony Buckley were quick to pick up on the link. As early as 2012/13, former Ireland coach Declan Kidney was alerted to the possibilities of the versatile Addison declaring for Ireland.

On Baz & Andrew's House of Rugby [from 18:00 below] Addison sat down with former Ireland internationals Andrew Trimble and Barry Murphy to talk about his Irish roots, his move to Ulster and his World Cup ambitions. 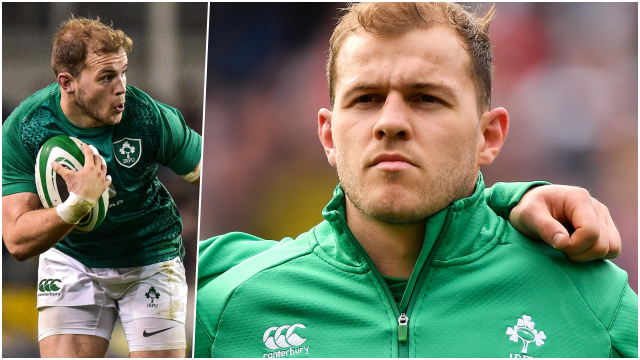 END_OF_DOCUMENT_TOKEN_TO_BE_REPLACED

Addison made his senior debut for Sale in his late teens and played over 100 times for them, in the Premiership and in Europe, before his 2018 move to Ulster.

The Irish interest cooled when Kidney was replaced by Joe Schmidt (in 2013) and he picked up a couple of injuries. In 2014/15, Addison's performances in the Champions Cup saw him pinging back on the radar. He recalls:

"I can remember, I played Clermont in the European Cup, about four of five years ago, and I had a mysterious phone call, and it was Joe on the other end of the line. So I had a quick chat with Joe then, maybe for a couple of seasons, I was hindered by injuries along the way. And it was around this time last year I was… it’s actually quite funny... I kind of conned my friend Peely (Ulster backs coach Dwayne Peel) into signing me here, almost.

"I was on holidays with one of Peely’s good mates, Mark Jones, who plays at Scarlets now. I was watching Six Nations, or an Irish game, and was like, ‘Jesus, this looks incredible. I think I need to chance my arm at going over’.

"And I was like (to Mark), ‘Is there any chance you could just mention to Peely that I’m open to a move (to Ulster) and just not that happy at Sale, with certain things'. And he was like, ‘Yeah, I’ll do it that way so it just doesn’t look like you’re desperate in talking to Peely!’

"So he texted Peely and said, 'Oh listen, Will might be keen on leaving Sale because he’s got a clause in his contract and then it went from there'."

END_OF_DOCUMENT_TOKEN_TO_BE_REPLACED

The text went out and Addison, in late 2017, made a trip over to Belfast to meet with Peel and Ulster's coaches. It was a tumultuous season - with two players involved in a long-running court trial, veteran players retiring, bad injuries, patchy form and head coach Jono Gibbes' departure - but Addison was determined to make the move work.

Joey Carbery and Ross Byrne may have baulked at the prospect of a move to Ulster but Addison, given his familial links, Irish ambitions and enthusiasm for the challenge at hand, was game.

The 26-year-old told Trimble and Murphy about two separate phone calls with Schmidt that convinced him he was making the right move.

"(Back in 2014/15), it was a bit of chat about how I was playing at the time, and a few pointers, and then whether I had any interest in coming over and whether that was something I was interested in. Obviously, I was.

"And then, like Joe is, he just loves rugby so we got quickly onto how I was playing and how I was finding life in Manchester, and how I was finding my rugby. You can end up talking for 35, 40 minutes easily enough to Joe, just talking rugby, which is fine – I don’t mind that, at times. So yeah, I had the odd bit of conversation with him just about how my game was going; any pointers he could give me...

"And eventually, last year I think, I touched base with him a little bit as well and saying that if there’s an opportunity to come over – if any of the clubs were looking. Ulster is somewhere that is close to my family and that’s the one that stuck out for us all."

Addison impressed in his Guinness PRO14 debut for Ulster, against Scarlets, and supporters quickly realised the club had landed a quality player. He played three times for Ireland in the November internationals and would have surely played in the Guinness Six Nations until, at a pre-tournament training camp in Portugal, an old back issue flared up.

He will miss this weekend's Champions Cup clash with Leinster but is hoping to be back in the mix after that, and would dearly love if Ulster were still in the hunt for both trophies when he did return.