Heading to the World Cup play-off games? You need to be wearing this Ireland jersey

You need to get your hands on this.

Thousands of Ireland fans left the country this morning to head to Copenhagen and there was only one thing on their mind; Go there, have a good time, get a good result (a win at best and at worst, a score-draw) and prepare themselves for Tuesday and what could possibly be the biggest game in Irish history since we went over to Iran in 2001.

We've only been in the World Cup a handful of times and if you're very lucky (and old enough), you'll remember all three. Italia '90, USA '94, Korea/Japan 2002 - a nation holding its breath, Ray Houghton's cheeky chip, Saipan and a certain man by the name of Toto Schillaci.

Italia '90 was our first World Cup and our most successful and we have a lot of fantastic memories from that competition and one of which is the beautiful away jersey that was worn by the Irish men who took to the field. 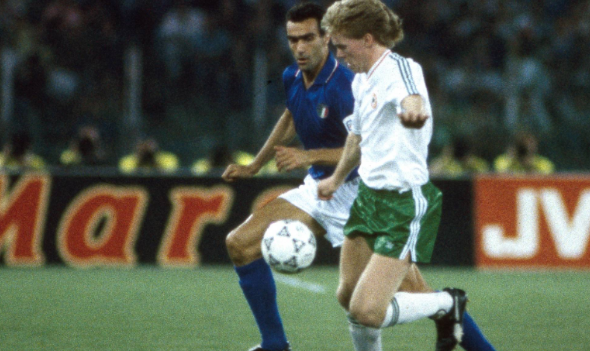 END_OF_DOCUMENT_TOKEN_TO_BE_REPLACED

Sure, Giuseppe Bergomi of Italy hadn't a prayer of getting the ball off Steve Staunton while he was wearing that shirt, they were like men possessed in it.

We know what you're thinking, we want to look as cool as Staunton does wearing that white wonder and today - the day before our first play-off match with Denmark - is your lucky day.

Sweet Jesus look at this beaut😍😍😍This is happening. Pre order now by emailing YouBoysInGreen@gmail.com
Can collect in Dublin for 45 Euro.#ybig pic.twitter.com/wh0QfMcJDS

Irish international soccer website You Boys in Green (YBIG) are selling a replica of the Ireland away jersey that was used in 1990 and it is going for the extremely cheap price of €45. 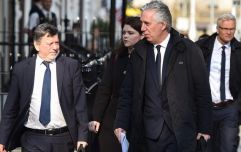 END_OF_DOCUMENT_TOKEN_TO_BE_REPLACED

They call it a beaut, it is a beaut and you can get your hands on this beaut by just getting in touch with the men at YBIG and emailing YouBoysInGreen@gmail.com.

If you're reading this in Copenhagen and roaring at the screen saying 'WHY DIDN'T YOU TELL ME ABOUT THIS YESTERDAY?' Don't panic, the shirt can be collected in Dublin when you come back from your trip and it will be brand new and ready just in time for the second leg.

The Big Reviewski || JOE · TBR Spotlight: Loki Episode One - 'Glorious Purpose'
popular
The JOE Friday Pub Quiz: Week 247
Matt LeBlanc has seen the memes of him as every Irish auld lad and very much enjoyed them
QUIZ: Take on this tasty challenge of your General Knowledge skills
5 new Netflix additions to get you through the weekend
QUIZ: Full marks are far from certain in this general knowledge quiz
The JOE Music Quiz: Week 61
A Dublin Cafe will pay you €50 if you can finish this MONSTER breakfast roll
You may also like
1 year ago
COMPETITION: Win four tickets to Republic of Ireland v Denmark
2 years ago
The Football Spin on change at the FAI, Declan Rice's smart move and why Ireland fans should be angry
2 years ago
The Football Spin Heartbreak Valentine's Day Declan Rice Special
2 years ago
"You cheeky bollocks!" - The key takeaways from Mick McCarthy's first press conference as Ireland manager
2 years ago
OFFICIAL: Mick McCarthy has been named as Republic of Ireland manager
2 years ago
Former Irish players have a great story about Brian Kerr and how he raised team morale
Next Page