WWE legends pay tribute to the man known as Viscera/Mabel

Once crowned King of the Ring, the man known as Big Daddy V, Viscera and Mabel, Nelson Frazier Jr. has passed away

At just 43-years-old, WWE wrestler Nelson Frazier Jr. has passed away after a suspected heart attack, according to the LA Times and the WWE.

Depending on your vintage, you will remember Frazier as either King Mabel, when he entered the WWE as part of a tag team with Mo, or later with Undertaker's Ministry of Darkness as Viscera. Later on again, he became known as Big Daddy V, and the wrestling world has been saddened by the news of his passing, with many of the biggest names in the industry tweeting their memories of the big man.

Really sad news about Viscera/King Mabel. Spent a lot of time around Viscera and enjoyed having him as a friend. RIP.

My thoughts and prayers are with the family of Big Viscera today. Big guy, big heart, and a great sense of humor. He will be missed.

I will miss him. He was a straight up dude. Big Daddy V thanks for all the matches & tours http://t.co/IJsBdZjYym

Very sorry to hear of the passing of Nelson Frazier"Viscera".A lovely man who always dressed and conducted himself like a real Pro.

Saddened by the passing of my friend Nelson Frazier Jr. Always great working with him. #RIPBigDaddyV pic.twitter.com/s2MwmM2NTv

Never the most athletic of men, Big Vis will be remembered for his high impact moves like the big splash and his chokebomb, and judging by the tributes, he will be missed mostly for his big heart. 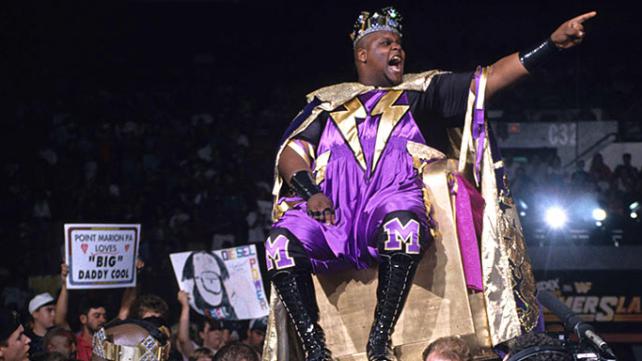 You can check out plenty more from Big Daddy V on the WWE.com website, where they have a whole selection of some of his best moments in the ring.

Pics via NotInHallOfFame.com and WWE.com

popular
County where winning Lotto jackpot ticket worth over €5.5 million was sold confirmed
Jordan Peterson suspended from Twitter over Elliot Page comment, says he won't apologise
QUIZ: Can you get 100% in JOE's great big halfway through 2022 quiz?
The JOE Friday Pub Quiz: Week 301
Parent's Benefit Leave in Ireland is being extended from today - here's what you need to know
The full list of cancelled flights in and out of Dublin Airport on Friday (so far)
Landlords must give longer eviction notice periods under newly passed legislation
You may also like
2 weeks ago
Vince McMahon steps back as WWE CEO amid probe into alleged misconduct
3 months ago
QUIZ: Can you name the wrestler based off their finishing move?
3 months ago
WWE legend Scott Hall has died, aged 63
10 months ago
Dwayne 'The Rock' Johnson says gruesome injury is the reason why he doesn't have six pack abs
11 months ago
WWE superstar explains why he eats breakfast cereal after a workout
1 year ago
Dave Bautista talks about Sheamus' potential future in Hollywood
Next Page