Given the fact that France's previous two games before the World Cup final were somewhat cagey affairs, the general consensus was that the showpiece match in Russia would be somewhat similar.

Deschamps' side disposed of Uruguay with minimal fuss in the quarter-finals and while their semi-final against Belgium wasn't exactly a classic, you had to admire France's ability to quell the threat of Hazard and co. while keeping them at an arm's length. 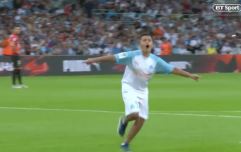 END_OF_DOCUMENT_TOKEN_TO_BE_REPLACED

On the other hand, Croatia seem to revel in chaotic, fast paced and off the cuff football. That's why they're such a joy to watch.

Their matches against Argentina, Russia and England were three of the most memorable games of the tournament and as the final approached, some people were confident that the meeting between Croatia and France would be an open affair.

A Paddy Power customer took a €20 punt on correctly predicting the half-time and full-time scores in the World Cup finals – and netted a whopping €10,000 this evening.

The odds of them managing to mystically foresee that the scoreboard during the France v Croatia thriller would read 2-1 to France at half-time, and 4-2 to France at full-time were a staggering 500/1. 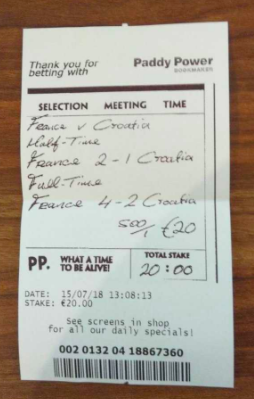 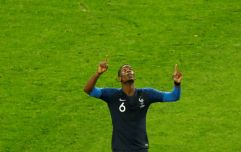 END_OF_DOCUMENT_TOKEN_TO_BE_REPLACED

Two hours before the game got underway, this punter strolled in through the doors of one of the Irish bookmaker’s shops in Co Kildare, and stuck their €20 down in full confidence of their apparent psychic abilities. 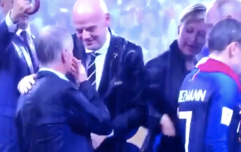 END_OF_DOCUMENT_TOKEN_TO_BE_REPLACED

Another person that's in the money is JOE reader Sean Keyes after he placed €10 on all of the following happening in the match:

Both teams to score in the first half - Mario Mandzukic's own-goal gave France the lead but that was cancelled out by Ivan Perisic's superb strike.

Kylian Mbappe to score anytime - The PSG attacker became the youngest player since Pele to score in World Cup final.

Mario Mandzukic to score anytime - As Sean said: "I owe him (Hugo Lloris) a beer."

Paul Pogba to score anytime - He might have dabbed with the World Cup trophy, but that pass at the start of his goal was worthy of gracing any final. 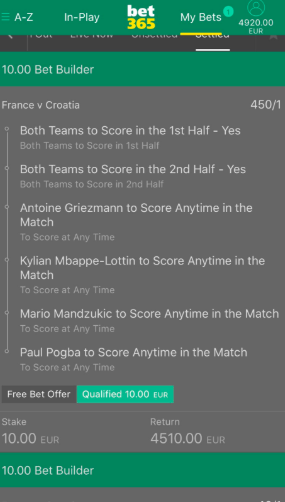 popular
Family of Ashling Murphy share heartbreaking tribute at Fleadh Cheoil
The JOE Movie Quiz: Week 166
The JOE Friday Pub Quiz: Week 306
QUIZ: Can you score 12/15 in this difficult General Knowledge Quiz?
QUIZ: Test your skills to the limit with this General Knowledge Quiz
One of the best Irish films of recent years is among the movies on TV tonight
Man in his mid-20s dies in two vehicle collision in Cork
You may also like
3 weeks ago
Gardaí head to France to track down new Sophie Toscan du Plantier suspect
7 months ago
Macron wants to "piss off" the unvaccinated
7 months ago
Over 65s in France without booster will lose Covid pass
9 months ago
France to ban plastic packaging for fruit and vegetables from January 2022
10 months ago
Marks & Spencer to pull 800 lines from Irish stores
1 year ago
France to outlaw shredding and gassing of male chicks by 2022
Next Page