A man is suing dating app Grindr after over 1,000 men showed up at his home and job

We all have, or if you're lucky, heard of horrific break-up stories, but this one takes the biscuit.

32-year-old Matthew Herrick is a New York-based actor who met his now-ex boyfriend on the gay dating app Grindr in 2015.

They have since broke up, but within the last six months, Matthew claims that over 1,000 men have showed up at his home and at his job looking for him for sex, but without any invitation by him.

END_OF_DOCUMENT_TOKEN_TO_BE_REPLACED

According to Matthew, his ex has used his image to create a fake profile on Grindr, and then invited men to Matthew's home.

Speaking to CNN, he says as many as 16 men have showed up to his home in just one day, with some of the instances becoming violent when the men had been previously told not to be put off by Matthew's dismissiveness, as this was merely a part of the previously agreed upon rape fantasy and role playing.

He claims that he has complained to Grindr over 50 times, but no actions has been taken, and as a result he is now suing the dating app.

Talking to Wired, Matthew says: "It's a living hell. My entire life has been stolen from me. My privacy has been taken from me. I'm humiliated daily." 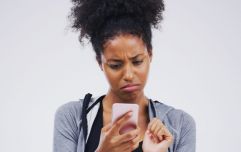 END_OF_DOCUMENT_TOKEN_TO_BE_REPLACED

Matthew also released a statement on Twitter as the situation began to grow in seriousness:

"Due to circumstances out of my control I have to remove myself from all social media. I have been having issues with a stalker who has tried and is running my name through the mud. He has now created fake accounts of gay apps such as Grindr and Scruff, declaring me a racist bigot and a Donald Trump supporter."

"It has now gone to the media. I will say that I am an avid supporter of the LGBT community and minorities alike. This defamation of character has gone to the extreme. To my family, friends, fans and supporters it saddens my heart to have these kind of lies spread about me. Please know I would never do any such horrible actions."

A spokesperson for Grindr spoke to CNN about the case: "[We are] committed to creating a safe environment through a system of digital and human screening tools, while also encouraging users to report suspicious and threatening activities."

"While we are constantly improving upon this process, it is important to remember that Grindr is an open platform. Grindr cooperates with law enforcement on a regular basis and does not condone abusive or violent behaviour."

popular
5 years ago, Hollywood took a massive gamble on a huge sequel... and lost big time
Netflix has just added 12 very big movies to their library
One of the most underrated crime thrillers of recent years is among the movies on TV tonight
Netflix backtracks on anti-password sharing measures following user outcry
Tom Hardy set to play Hannibal Lecter-type serial killer in new series
Guy Ritchie's new war movie looks like it'll be a very emotional watch
The 50 most iconic songs of all time* have been revealed
You may also like
14 hours ago
Woman who had sex every week with 'special friends' shares why she went celibate for a year
2 weeks ago
Netflix is about to launch the Avengers Assemble of reality dating shows
3 weeks ago
"Time to break this nonsense taboo" - Carol Vorderman says she has five male partners
3 weeks ago
People reveal their most bizarre reasons for breaking up with a partner
1 month ago
Straight woman and gay man make marriage work with weekly sex feedback sessions
2 months ago
Cher, 76, confirms relationship with man less than half her age
Next Page