Pic: FIFA 15 is so realistic, Luis Suarez is suspended until the end of October

The eagerly awaited FIFA 15 game has gone above and beyond the call of duty with their attempts at keeping it real.

North American gamers were the first to get their hands on the new FIFA 15 and it appears that no stone has been left unturned in making this the most realistic football game in existence. Everyone knows that a certain Uruguayan striker is banned by FIFA until October following his 'snacking' in Brazil, but few would have guessed that the ban would extend itself to the EA Sports game too.

Check out this still from the career mode option. 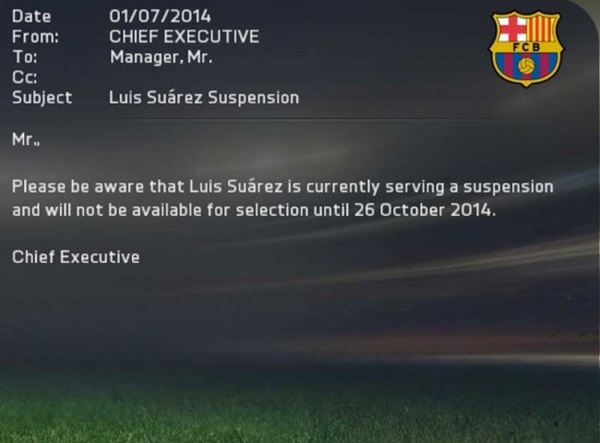 Now all we need to see is a Manchester United team devastating in attack, but helpless in defence and we'll know that they've covered all bases.

popular
Seven more suspected cases of unexplained hepatitis in Ireland under investigation
Netflix has just quietly added 12 big movies to its library
Gardaí investigating firearm being discharged near film set in Donegal
Amazon Prime Video has just added 21 big movies to its library
Dáil passes motion to secure public ownership of National Maternity Hospital site
Has anyone seen Mr Tayto?
The six Eurovision countries with "irregular voting patterns" have been revealed
You may also like
1 day ago
PlayStation unveils all-new PS Plus game line-up
5 days ago
Two of 2022's biggest, most-anticipated games have been pushed back to 2023
6 days ago
JOE Gaming Weekly - Streets Of Rage fans might love this week's big new release
1 week ago
WATCH: New gameplay footage from Gotham Knights looks absolutely incredible
1 week ago
JOE Gaming Weekly - FIFA cross-platform play is on the way
2 weeks ago
The free subscription games coming to PlayStation and Xbox in May
Next Page