I'd wager that a fair amount of the people you know on Twitter prefer it to other social media sites because of its interface and simplicity. Also, it's easier to unfollow people that constantly post pictures of cats.

Another one of the more popular traits of Twitter is that your timeline is in chronological order, handy if you're following live events or breaking news, but the company are experimenting with a new timeline that's more like the one Facebook currently uses. i.e. random posts appearing in no particular pattern. 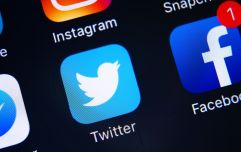 END_OF_DOCUMENT_TOKEN_TO_BE_REPLACED

Twitter has said that they're currently experimenting with this new timeline on some users accounts as tweets now appear in order of relevance as opposed to the time they were sent.

"Yes, this is an experiment. We're continuing to explore ways to surface the best content for people using Twitter," spokeswoman Liina Potter said in an emailed statement.

Some people are not impressed with the changes.

Hey. @Twitter. This "timeline out of order" nonsense is exactly why I deleted Facebook. You are equally disposable. Don't do it.

Hey @twitter I do not want my timeline in random, non-chronological order. That's why I want to burn facebook to the ground.

I swear to god, @twitter, you take my timeline out of order and will mail the contents of my cat's litter box to your headquarters.

The #Twitter timeline change could also make it harder for journalists to correct erroneous tweets in an effective and transparent way.

popular
The JOE Friday Pub Quiz: Week 242
Kate O'Connell lays into Fine Gael in explosive Claire Byrne interview
COMPETITION: Win a star-gazing camping adventure to the stunning Aran Islands for you and your housemate
Here are the best movies on TV this evening
The 50 most iconic songs of all time* have been revealed
"Giant" piece of Chinese rocket set to hit Earth this weekend
Penneys shopping by appointment booking portal is now live
You may also like
2 days ago
Donald Trump will not be allowed back on Facebook or Instagram
3 weeks ago
Stephen Donnelly responds to inquest into his lack of Twitter mentions
1 month ago
US military account tweets gibberish after child accidentally takes it over
3 months ago
Bebo, the greatest social network of all time, is returning to save us
3 months ago
Twitter CEO Jack Dorsey explains why Trump is permanently banned
3 months ago
Twitter explains why it has permanently suspended Donald Trump
Next Page