Video: Nintendo and Sony made a hybrid console 20 years ago and this is what it looked like

Maybe it's best that this never went on general sale.

If you're old enough that you remember playing video games 20 years ago, the chances are high that you were playing those video games on a Sony PlayStation or a Super Nintendo.

END_OF_DOCUMENT_TOKEN_TO_BE_REPLACED

Had the stars aligned differently, you could have been playing a hybrid called a 'Nintendo PlayStation', a console that very few people knew about until pictures and a video of the console surfaced online this week.

In the 1990s, before the introduction of the PlayStation, Sony and Nintendo were partners and with the former looking to enter the console game and the latter looking to revitalise the Super Nintendo, an idea to produce a hybrid console was born.

A man known as Dan Diebold posted pictures and a video to Reddit at the weekend having come across the hybrid console in his father's attic recently. 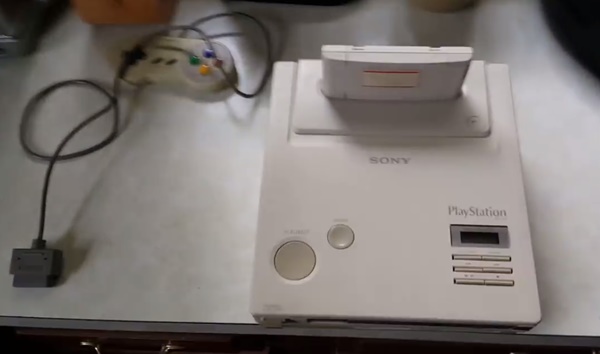 When that company went under in 2009, he was tasked with disposing of a number of company resources, including the protoype units of the Nintendo PlayStation, 200 of which were made.

Terry obviously held onto one of the consoles in the attic and while it looks every one of its 20 years now, it must have been quite revolutionary at the time, with space for a cartridge and a CD rom, none of which have been tested by Dan Diebold since his recent discovery.

If Dan also stumbles across a hybrid game that combines the best of Crash Bandicoot with Mario Kart, then we insist that Sony and Nintendo combine to make this console happen once again.

The Big Reviewski || JOE · The Big Reviewski with Andy Serkis, Squid Game follow-ups & the return of Succession
popular
Brian Laundrie: 'Strong probability' remains found belong to missing fiance
QUIZ: Can you name all the countries beginning with L?
How to lower your cholesterol - 5 really handy tips
WATCH: Micheál Martin and Danny Healy-Rae had an almighty row in the Dáil
Here's the lineup for this week's Late Late Show
The cast of Succession on the most ridiculously expensive scene in the show
Socially distanced queues at bar counters expected to be allowed under new guidelines
You may also like
4 months ago
Taking a look at the seven huge games trailers that dropped this week
5 months ago
Returnal is either the best game or the worst game of 2021, depending on what type of gamer you are
5 months ago
New study shows Ireland among the world's top video game cheaters
7 months ago
WATCH: The first trailer for Aliens: Fireteam has arrived
11 months ago
Assassin’s Creed Valhalla review: The best in the series so far
11 months ago
PlayStation 5 review - A giant leap forward in video game consoles
Next Page