WATCH: We take Far Cry 5 for a test run

It's the wild wild Mid-West!

The latest instalment of the Far Cry franchise hit the shelves last month. 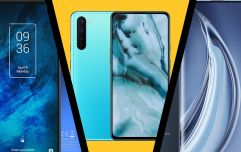 END_OF_DOCUMENT_TOKEN_TO_BE_REPLACED

If you like being transported to far-flung places and pitting yourself against nasty terrorists and cults, then this series has everything you could ever want.

This time around you'll be taken to the arse end of the fictional Hope County in the non-fictional Montana. A fairly evil looking doomsday cult that goes by the name The Project at Eden's Gate is causing all sorts of problems for the locals. It's your job as a deputy sheriff to show these bad hombres who's really in charge around these parts!

JOE's own Eoin Ronayne and Tony Cantwell had a go of the new game ahead of its release. You can see how they got on in the video below.

popular
Meteor shower to be visible tonight as Halley's Comet passes over Ireland
The 50 most iconic songs of all time* have been revealed
Benedetta is undoubtedly going to be the most controversial movie of 2021
PICS: The man with the biggest penis in the world has one unbelievable problem with it
Joe Duffy listener complains of being quoted €4,100 for three-night hotel stay in Kerry this summer
Woman expecting to give birth to seven babies ends up having nine
QUIZ: Can you guess these European countries from their outlines?
You may also like
1 day ago
If you’re throwing out your old phone, TV or laptop, this is the correct way to do it
5 days ago
COMPETITION: Win an epic adventure in this stunning Mayo lodge for you and your housemate
5 days ago
Irish healthcare company unveils brand new itchy scalp solution
6 days ago
Every Guinness fan needs to get their hands on this amazing Guinness Tasting Kit
6 days ago
COMPETITION: Win festival tickets, JustEat gift cards and more amazing prizes
1 week ago
There’s help at hand if you’re feeling overwhelmed by everything at the moment
Next Page