In his programme notes today, the Villa boss dedicated the New Year's Day victory over Sunderland to Kildare native killed in a hit-and-run in December.

One of the most tragic stories over Christmas was that of Jody O'Reilly. The young Kildare native was killed in a hit-and-run incident in Birmingham on December 15 and his family and friends began a Facebook campaign to get his beloved Aston Villa to hold a minute's silence in his honour over the festive period.

We wrote about it then and we also brought you the good news that Villa agreed to a tribute, a minute's applause, before the game against Crystal Palace on St Stephen's Day.

Villa lost that game but they got a valuable win on New Year's Day away to Sunderland and in his message in the programme ahead of today's FA Cup tie against Sheffield United, Paul Lambert dedicated that win to Jody. 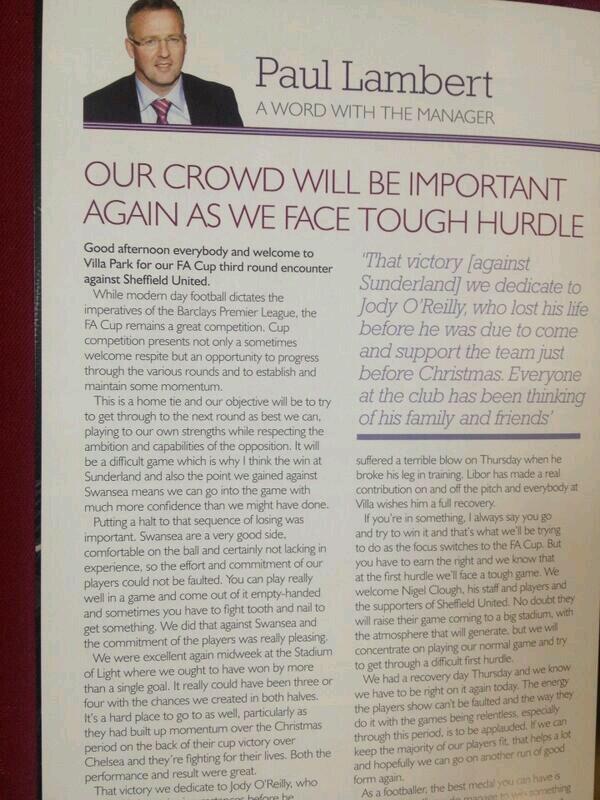 It's a classy move by Lambert, and the club, to remember Jody and we're sure it means a lot to his family and friends.

Thanks to Thomas Curran for the snap.

popular
QUIZ: It's time for one of our trickiest General Knowledge Quizzes yet
The JOE Movie Quiz: Week 161
Landlords must give longer eviction notice periods under newly passed legislation
QUIZ: Can you get 100% in JOE's great big halfway through 2022 quiz?
The 24 biggest movies still to come to cinemas in 2022
Jordan Peterson suspended from Twitter over Elliot Page comment, says he won't apologise
The JOE Friday Pub Quiz: Week 301
You may also like
1 year ago
Aston Villa ban players from participating in Fantasy Premier League
3 years ago
Jack Grealish attacker Paul Mitchell jailed by judge
4 years ago
Former Aston Villa defender Jlloyd Samuel dies aged 37
5 years ago
Former England international Ugo Ehiogu has died at the age of 44
5 years ago
Sky viewers were impressed with Aston Villa bound Steve Bruce's dramatic weight loss
5 years ago
TWEETS: The football world mourns Dalian Atkinson
Next Page