Bidding war over dried glue that looks like Homer Simpson. Sort of.

Would you spend over €2,000 for a piece of dried glue? What if it looked like Homer Simpson?  Yeah, we didn’t think so, but apparently there are some people in the world who feel like their lives would be simply incomplete without some glue that looks like Homer.

A piece of dried glue that measures 1cm is currently attracting bids of over £2,000 on eBay just because it looks like Homer Simpson…eh…sort of…if you squint: 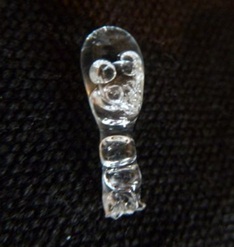 The Metro reports that Christopher Herbert, the man selling the glob of glue, noticed its “uncanny” resemblance to the cartoon character and listed it on eBay. He describes the item as “the missing piece in any Simpson enthusiast’s collection.”

We have to admit that Christopher uses some good marketing skills to entice buyers:

“This is a true to life likeness of Homer Simpson’s head, made naturally by an overflowing tube of Uhu glue!”

The bidding for the glue glob started at a measly 99p but has since increased to just over £2,000 after two bidders have started a fight to claim the glue. Honestly, these people are either stupidly rich or just plain stupid.

The seller from Camden in north London said: “I was amazed at how the bidding took off.”

We are too Christopher... we are too.

popular
Nearly 100 flights delayed at Dublin Airport on Monday
QUIZ: Can you get top marks in this short but tricky Irish geography quiz?
Family of Ashling Murphy share heartbreaking tribute at Fleadh Cheoil
RTÉ tries to solve Michael Collins murder in new documentary
4-year-old girl killed in Sligo caravan park named as Alice Dunleavy
QUIZ: Can you score 12/15 in this difficult General Knowledge Quiz?
The 50 most iconic songs of all time* have been revealed
You may also like
5 years ago
WATCH: This video showing 'hand-rolled ice cream' in Dublin is mesmerising
5 years ago
There's a new app that helps people find any food, drink or product they're looking for, locally
6 years ago
5 reasons why your business should 'pop-up' at one of Dublin's busiest stations
6 years ago
JOE BUSINESS: 3 great reasons you should pop-up in Dun Laoghaire this summer
6 years ago
This new app will help you keep track of the Luas strikes
6 years ago
TWEETS: Mixed reaction as Joan Burton steps down as leader of the Labour party
Next Page