Looks like December 2 is a date for the diary of every Manchester United fan.

They are probably the most famous youth team of all time. The 1992 Youth Cup winners from Manchester United contained players who would go on to become club legends like David Beckham, Ryan Giggs and Gary Neville. And Nicky Butt.

Add in others like Paul Scholes and Phil Neville, who were also part of the same academy set up at the time, and the ‘Class of `92’ or 'Fergie Fledglings' have gone down in history as the basis for the success the club had over the subsequent two decades. Hell, Ryan Giggs is still playing for them.

Now, the story of that group of players is set to be told in a new documentary called, unsurprisingly, ‘The Class of `92’. Beckham and Phil Neville went on social media yesterday to announce it and give some details.

What we know is that the six players named above reunite to talk about their time at Old Trafford, especially the period from 1992 to the European Cup success of 1999.

The film will also feature Zinedine Zidane, Tony Blair (!) and Eric Cantona talking about that team and their legacy.

It is set to hit cinemas on December 2, and until a trailer is released all we have is the poster to show you. 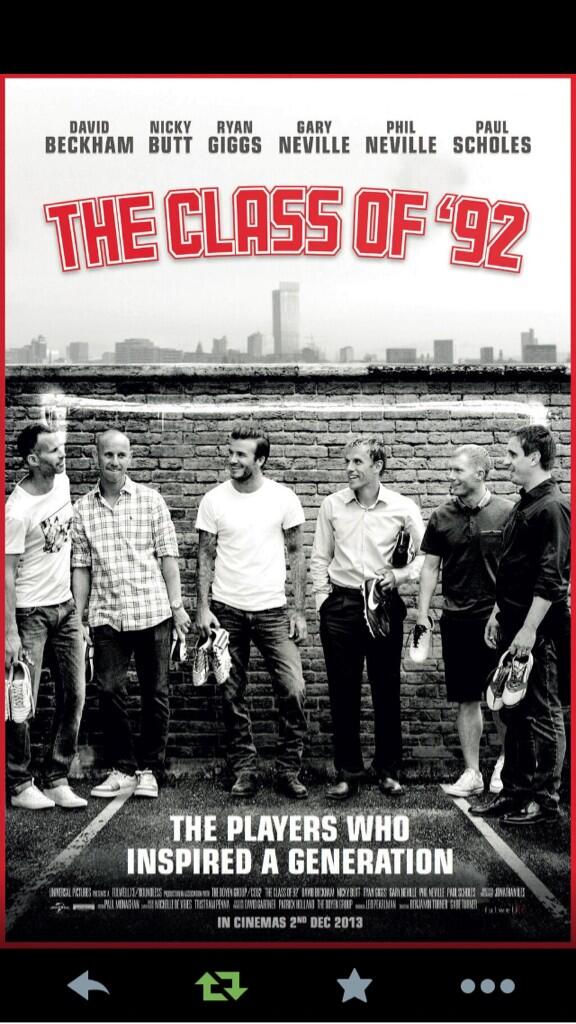 popular
Netflix has just added 23 very big movies to its library
The JOE Friday Pub Quiz: Week 308
Why Bran Stark is the true villain of Game of Thrones
One of 2022’s best hidden-gem comedy series is available to stream
The 50 most iconic songs of all time* have been revealed
Passenger plane dropped 1,200 feet in a minute without pilots noticing
Two Irish people arrested in "smuggling event" near Miami
You may also like
2 months ago
BBC trainee accidentally posts message mocking Man United live on TV
1 year ago
COMPETITION: WIN a copy of Eric Cantona's new Manchester United documentary, The United Way, on DVD
1 year ago
Manchester United documentary written by Eric Cantona available to watch at home in Ireland this May
1 year ago
Marcus Rashford launches book club to help kids experience 'escapism' of reading
1 year ago
Paul Pogba releases powerful statement in response to 'fake news' from The Sun
1 year ago
The JOE Pub Quiz: Week 214
Next Page