Arsenal striker Nicklas Bendtner had a difficult week after being found guilty of drink-driving, but it has proved profitable for a Danish toy-maker.

Earlier this week, Bendtner was caught driving on the wrong side of the road in Copenhagen with blood-alcohol levels more than three times the legal limit and paid a heavy price.

The striker was fined more than €100,000, has been put off the road for three years and suspended by the Danish FA for six months in what he claimed was the “worst day of his life”, but that is not the end of the story.

According to Ekstra Bladet, one quick-thinking company packaged a Nicklas Bendtner figurine from Euro 2012, a toy car and a fridge magnet shaped like a Tuborg beer bottle, to create a makeshift “Bendtner Set.” They only put two together as joke at first, but when they quickly sold, they hastily assembled more. 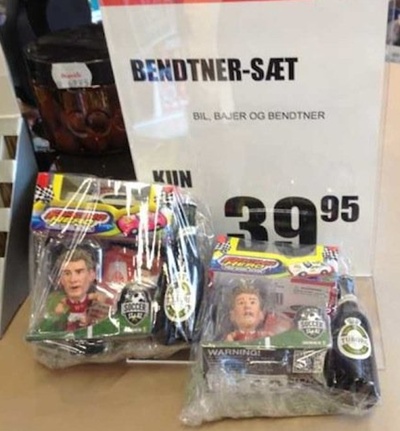 We’re not sure what the Arsenal striker made of it all, but he can have no-one to blame but himself.

popular
The Toy Show DJ brothers have been offered their very first gig
Clint Eastwood's final western is among the movies on TV tonight
The full list of all the new shows and movies coming to Netflix in December
The JOE Friday Pub Quiz: Week 271
PCR tests to be required for all international arrivals to the UK
QUIZ: Let's get cracking with this General Knowledge Quiz
Ryanair's "virtue signalling" claims are indicative of Ireland's view on the Irish language
You may also like
5 years ago
WATCH: This video showing 'hand-rolled ice cream' in Dublin is mesmerising
5 years ago
There's a new app that helps people find any food, drink or product they're looking for, locally
5 years ago
5 reasons why your business should 'pop-up' at one of Dublin's busiest stations
5 years ago
JOE BUSINESS: 3 great reasons you should pop-up in Dun Laoghaire this summer
5 years ago
This new app will help you keep track of the Luas strikes
5 years ago
TWEETS: Mixed reaction as Joan Burton steps down as leader of the Labour party
Next Page