Flying the flag for GAA in Spain

Ahead of the seventh staging of the Iberian GAA Championships in Seville this weekend, JOE talked to treasurer of host club Eire Og, Kevin Lenane, about the first ever GAA tournament to be held in the city.

While Gaelic footballers from club and county prepare to brave the elements and take to fields up and down the country this weekend, there are probably plenty who would like to trade places with a band of Irish ex-pats flying the flag for the GAA in sunny Seville in the south of Spain.

A forecast of a pleasant day with temperatures of around 20 degrees is expected on Saturday as Gaelic football teams from Barcelona, Madrid, Valencia, Pamplona, Marbella, A Coruña and Seville prepare to contest the seventh edition of the Iberian GAA Championships.

It is the first time that a GAA tournament will ever be held in the city and treasurer of host club, Eire Og Seville, or ‘Los Verdirojos’, Kevin Lenane is looking forward to it.

“These tournaments go on over a whole weekend. For example, this weekend in Seville everyone will be arriving on a Friday night and we’ll have a meeting and a couple of pints, just a few though because we’ll be getting underway Saturday morning at nine,” Lenane told JOE over the phone earlier this week.

“We have a dinner for 150 people organised afterwards and then there are presentations and awards for the best male and female player, stuff like that. It’s coming along pretty good at the moment so hopefully it will all go well at the weekend.”

How it all started

Kevin has been in Spain for eleven years after he left his job, packed his bags and travelled south to chase a native girl he met in Ireland, the girl to which he is now wed. Kevin has settled in Seville with his wife and daughter, but once GAA is in the blood, it’s hard to give up and every Paddy’s Day he would meet like-minded fellow Gaels who shared his enthusiasm for setting up a GAA Club, but nothing ever came of it.

That all changed in 2009, when Kevin was out of work and had time to throw himself into the task. In November of that year, Kevin says that ‘four or five men were training in the mud and the slog’ but he didn’t see it lasting beyond Christmas. The club were then bolstered by the arrival of a gang of students from Dublin and a few local lads and they haven’t looked back since. 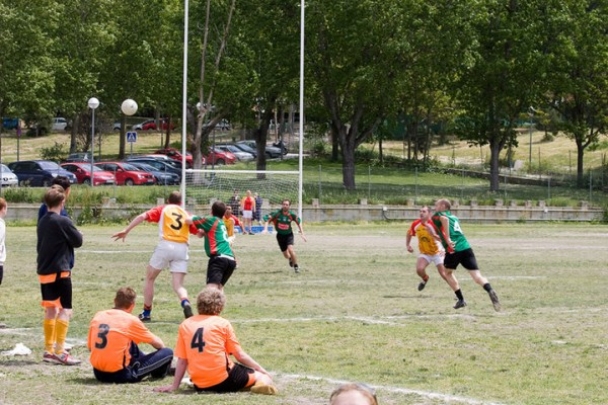 “This year we had 25 at training starting off, we were in shock ourselves because the whole organisation of training was a bit mental at the start because there was a lot of Spanish guys there, it was probably half and half at the start but we’ve lost a lot of locals since.

“That was probably our own fault because there wasn’t enough proper trainers to take the Spanish lads aside and show them how to play the game properly. We’re down now to about 16 full-time lads that we can rely on. We still have about four Spanish lads that stuck with it and they’re flying now. One of the lads will probably start the next day and he’s the oldest one of them, he’s about 37 years old. The other Spanish lads will get a few minutes here and there as well.”

With the economic climate forcing people in this country to leave in their droves, GAA is thriving in far-flung destinations all around the world and Spain is no different. A team from Galicia will increase the number of teams participating in this year’s to championship to seven, while one of the teams, Pamplona, are made up of a gang of players from the Basque country with little or no Irish influence.

So what is it about Gaelic Football that has captured the hearts of a nation more used to seeing the likes of Xavi, Iniesta and David Villa, the most beautiful exponents of another game with a round ball, on a regular basis?

“First of all, they say that they have a love of the game,” says Kevin.

“Some of them have been travelling in Ireland and have seen the game and they love the whole amateur side of it as well, they love that everyone’s playing for the love of it and not for money or trying to get somewhere else in life. At the end of the day it all comes down to the craic as well.

“We’ve got a good bit of coverage in the newspapers as well; we were on the back page of one of the sports papers here, Estadio Deportivo, this week. They like anything different and there’s the whole Irish thing as well, the Spanish actually love us and anytime we go on about the Gaelic football they seem really interested. We’ve explained the game to them, telling them that it’s a mix of rugby, basketball, soccer and Australian Rules football – then you show them hurling and they’re flabbergasted altogether. They think it’s a barbarian sport!”

And have the locals taught the Irish lads anything new?

“They’ve taught us how to turn up late for training!” Kevin laughs.

“Down here in the south, everything is a bit laid back but we’ll forgive that if they turn up for the games. In fairness, the Spanish lads that are here are very enthusiastic, they’re up for anything, they’ve done interviews with local newspapers and stuff and have even helped setting up the club.”

With 64 clubs required by law to set up a federation for a sport in Spain, GAA in the country is lacking help and fundraising from the authorities and it is a struggle at times for Eire Og to maintain their existence. The GAA have helped and will be providing fully-trained referees for the tournament this weekend, but Seville’s location in the south is often a hindrance as it is a big effort to make the trek to places like Valencia or Barcelona for a tournament.

The members of the club are a dedicated bunch, however, and have organised funds and even stripped themselves of their clothes in order to raise funds. Kevin assures me that I am free to publish Facebook photos of the club’s ‘Full Monty’ night and embarrass some people in the process, but I decline on the basis that some of our younger readers may be offended by what’s on show. In all seriousness, however, the fundraising is vital to ensure that the club can stay afloat and continue to compete with some of the big guns in the country.

“Last year we only got to two tournaments because of financial reasons, we went to Marbella which is only a two and a half hour drive and we drove to Madrid as well which took about five hours. This year we obviously have our own tournament, then there’s a tournament in Madrid in April and there’s a tournament in Valencia as well and we’ve already bought our tickets, we’re flying to Valencia. 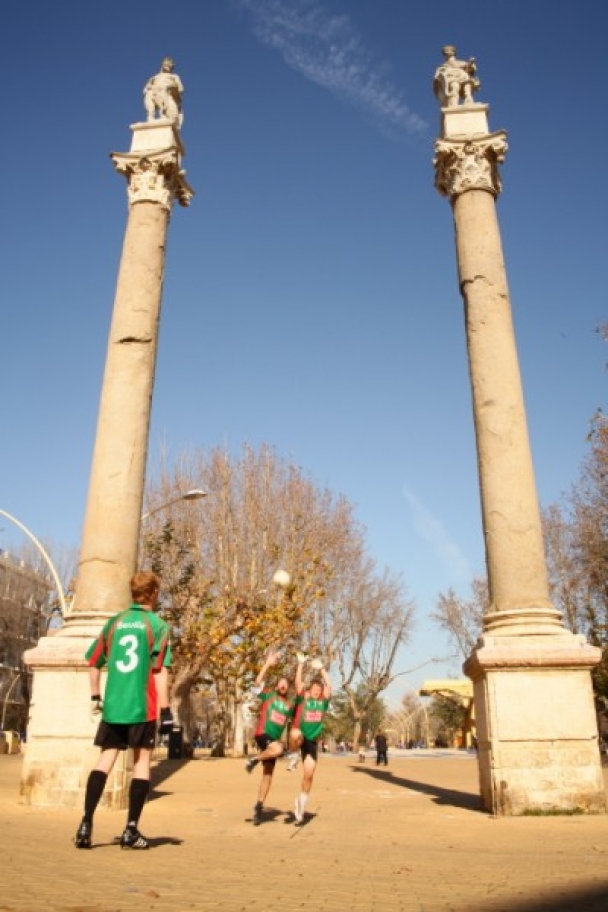 The lads conduct a training session at Seville's landmark Pillars of Hercules on the Plaza de la Alameda.

“The problem is that Spain is so big that it’s hard to get to every tournament and how we get on in our own tournament and in Valencia and Madrid will affect whether or not we get to other tournaments in Pamplona and Barcelona. Obviously we’d love to go to them all, but we’re a good bit away from the other clubs – Madrid, Barcelona and Valencia are the three core clubs and Pamplona is not too far away from them either, they form a bit of a square at the top of the country and can drive to each other whereas we need to look at getting trains or flights for nearly every tournament, so we go on a tournament to tournament basis.

“Next year we might get a sponsor but we don’t know yet, a couple of people have been asking us already and if we can put across to them that we’ve got publicity back home and in the local press here as well, everyone wants to see their names up on the paper so hopefully that might help us out a bit.”

Although the Iberian Championships are the main focus of attention this weekend, Kevin, like the club footballer who looks beyond the county championship and dreams of representing his parish in Croke Park, has loftier ambitions and dreams of one day competing in the Pan-European games, a competition he describes with tongue firmly in cheek as ‘the Champions League of GAA in Europe’.

The competition is a representation of just how much the GAA has grown on the continent. There are teams and tournaments popping up all over the place, while in some places they have begun to coach Gaelic Football and even hurling in schools.

“Before I finish up my main intention is to play in the pan European games. Every country has their own little tournament and normally the best one or two teams go to the Pan-European games, it’s like the Champions League I suppose, but I wouldn’t put it on a par with that yet!” says Kevin, yet being the operative word. 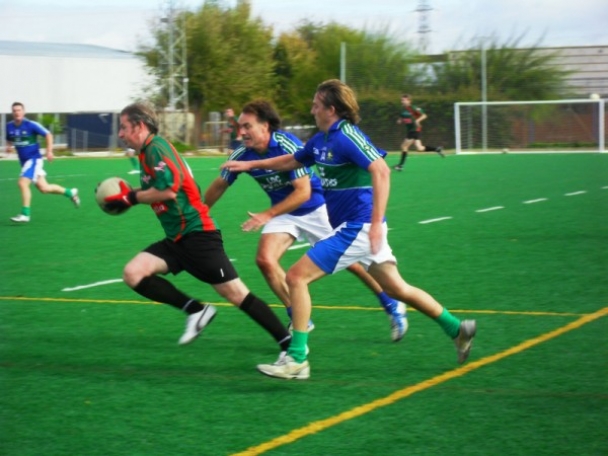 “The powerhouses in Europe would be in Brussels, Luxembourg and Germany. They have started up in Scandinavia and there’s a team in Hungary as well. In France, it’s very big up in Brittany, I think there are nine or ten clubs up there, but it’s all local guys. They’ve set up their own league and they’re actually teaching it in the schools up there as well.

“I think nearly half of the money this year from the European County Board has been allocated to Brittany to get the hurling and football up and running because that’s the way to go, to get it into the schools, because you can always count on the couple of ex-pats, but we always get older and you haven’t got the consistency there so you need to start it at under-age level if you want to keep it going.

The future is bright, but this Saturday, it’s all about ‘Los Verdirojos’ as Kevin and his teammates aim to put a spanner in the works of the all-conquering Madrid Gaels.

“I think we have a good opportunity to make name for ourselves this weekend,” he says.

“Madrid Gaels won the men’s and women’s tournament last year so they’re there to be shot at. It would be nice to beat the Barcelonas and Madrids of this world for once.”

For more information on the club, the game and the tournament, you can visit the Eire Og website or email dermotmcorrigan@gmail.com.

popular
Conor Mcgregor hit by car ‘at full speed’ while cycling
New Netflix series deserves to be as big as Stranger Things
The JOE Friday Pub Quiz: Week 331
Couple left mortified after best man delivers incredible punchline during speech
Peaky Blinders creator on the lookout for 'skinheads' for new drama
All of the new Netflix movies and shows arriving in February
DJ accidentally shoots herself in the face with a confetti cannon while performing
You may also like
6 years ago
Here's why all Heinz ketchup bottles have the words '57 varieties' on them
6 years ago
JOE meets Brian O'Sullivan, the man behind Camile Thai Kitchen
6 years ago
Good news because Chopped is opening five new restaurants in Dublin and Kildare with 110 jobs created
6 years ago
RTÉ presenter's new app will measure how many people are talking about your favourite TV shows
6 years ago
Ireland are on the ropes and people are absolutely crying out for Wes Hoolahan to be introduced
6 years ago
WATCH: This video showing 'hand-rolled ice cream' in Dublin is mesmerising
Next Page