Do you believe in ghosts? Apparently there’s a nun haunting the Long Walk in Galway. We don’t know about you, but if we were ghosts we’d probably haunt somewhere a bit cooler than an industrial estate, in fairness.

The Galway Independent has unleashed pictures of the spectre that were taken by a local photographer. Jonathan Curran was taking photographs of the area when he caught the nun on camera. She was just hanging around, looking creepy. The usual.

The paper reports that one of the images clearly shows a female figure that has the appearance of a 19th century Claddagh nun – we’re just grateful that they happened to have a ghost-nun expert on hand to identify the mysterious blob.

How did Mr Curran react to the discovery? He was “freaked” as apparently the 12 other pictures that he taken didn’t have the ghost nun in them. That means she appeared in the 13th picture…this is almost TOO good…

“The image was not visible either before or after the photograph was taken and was not captured in any of the other photographs, either going or coming. She just seemed to appear for a moment and then disappear. There were other people on the Long Walk that day, but they seemed oblivious to her presence,” he said.

The picture is causing a major stir in Galway as people try to distinguish whether the nun is actually a ghost or if she’s just an optical illusion. We love a good ghost story, but we find it hard to believe that a 19th Century nun was just roaming around an area that looks like an industrial estate. Wouldn’t she have better things to be doing? Here's a closer look at the above picture so you can examine it yourself: 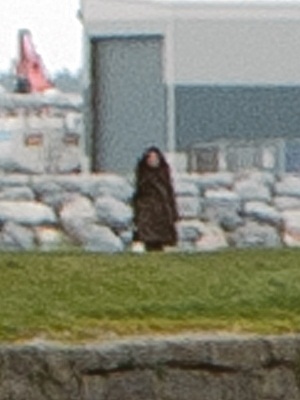 William Henry, a Galway historian said that there were lots of hauntings around the Claddagh, Wolfe Tone Bridge and Long Walk over the years and that stories of the ‘Lady in White’ were told on a regular basis.

Clearly people in Galway have too much time on their hands. Or they’re actually starting to believe the tales told by drunken students who have seen “strange” things on the way home after a night out, only to realise that their “ghost” was in fact a post box.

Mr Henry said that the image of the nun was striking and “certainly stands out of place in a modern context.”

“She appears to be looking directly at the camera indicating an awareness of her surroundings,” he added.

popular
Eurovision producers reveal "irregular voting patterns" during Saturday night's final
One of Liam Neeson's best ever performances is among the movies on TV tonight
QUIZ: Try out one of our trickiest General Knowledge Quizzes yet
Where will 2023's Eurovision be held if Ukraine can't host?
QUIZ: Can you name the disaster movie from a single image from each disaster
REVIEW: Van Gogh Dublin is a truly unique cultural experience
The JOE Movie Quiz: Week 154
You may also like
5 years ago
WATCH: This video showing 'hand-rolled ice cream' in Dublin is mesmerising
5 years ago
There's a new app that helps people find any food, drink or product they're looking for, locally
5 years ago
5 reasons why your business should 'pop-up' at one of Dublin's busiest stations
5 years ago
JOE BUSINESS: 3 great reasons you should pop-up in Dun Laoghaire this summer
6 years ago
This new app will help you keep track of the Luas strikes
6 years ago
TWEETS: Mixed reaction as Joan Burton steps down as leader of the Labour party
Next Page