Gulf in Lions experience between BOD and Tuilagi plain to see

Brian O’Driscoll and Manu Tuilagi showed an impressive understanding yesterday for their first run out, but the gulf in experience was clearly shown in numbers.

Twelve years separate the midfield duo, but they developed a quick understanding, though it has to be said they will come up against stiffer defensive lines.

It was in 2001 against the same opposition that a young O’Driscoll made his debut in the red jersey, scoring a try from full-back and needless to say many players have come and gone in that same period. A hundred to be precise. 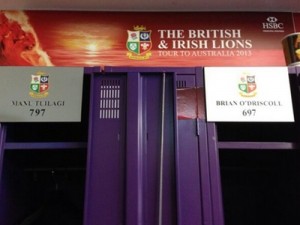 The changing room indicated had a plaque for each player indicating how many players before them had donned the famous jersey. The Leicester midfielder became the 797th such player to highlight further the longevity of the Irish legend.

100 not out and counting for O’Driscoll.

popular
New Netflix series deserves to be as big as Stranger Things
BBC apologises after calling Paul Mescal 'British' in Oscar coverage
Netflix has just added one of the best sci-fi movies of recent years
This is what the cheapest house for sale in Dublin looks like
Couple left unable to eat or drink after spending €4k on 'Turkey teeth'
Irish names among the top 10 hardest words for British people to pronounce
Barry Keoghan mentioned in UK Parliament speech during government debate
You may also like
10 months ago
RTÉ receives 15 complaints over Tommy Tiernan and Amy Huberman interview
3 years ago
Joe Schmidt was absolutely chuffed when Brian O'Driscoll surprised him on the Late Late
4 years ago
Andrew Trimble's claim about Tana Umaga spear tackle had Brian O'Driscoll in convulsions
4 years ago
Ruby Walsh gives insight into Brian O'Driscoll's post making fun of him meeting Prince Harry
4 years ago
WATCH: Former Irish rugby captain Brian O'Driscoll takes part in Orange parade in Armagh
4 years ago
Brian O'Driscoll made a tasty sum of money on a Six Nations bet that Ireland would win the Grand Slam
Next Page