Something tells us the layout editor of the paper might be on the lookout for a new job, or is facing a pretty severe slap on the wrist.

Getting your name or your face in the local paper is a big deal in almost every community worldwide and it’s an even bigger deal when the paper in question have seen fit to splash your mug on the front page.

Spare a thought then for the two poor nurses pictured on the front page of this morning’s Sheffield Star, whose appearance in the paper will more likely be remembered for what looks for all the world like an association with an unfortunate and pretty damaging headline below.

It would be hard for a reader not to link a headline relating to a story about alleged systematic bullying of dementia patients with a completely unrelated picture of an elderly man getting a peck on the cheek from two nurses at the same time (the lucky dog) and we can imagine the nurses in question sending a strongly-worded letter, or even worse, to the offices of the Sheffield Star in the near future.

As we do in all cases of unfortunate picture/headline juxtapositions, we must point out that it's not a patch on our all-time favourite... 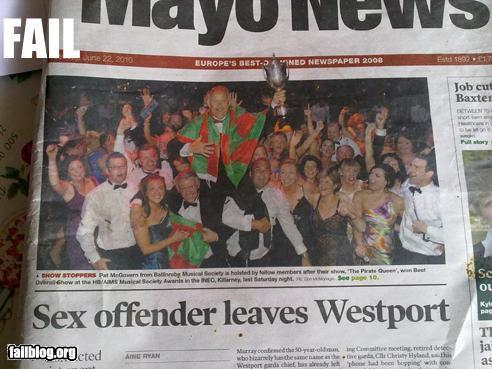 popular
Jordan Peterson suspended from Twitter over Elliot Page comment, says he won't apologise
County where winning Lotto jackpot ticket worth over €5.5 million was sold confirmed
The most inexplicable prequel of all time has just arrived
The JOE Friday Pub Quiz: Week 301
QUIZ: Can you get 100% in JOE's great big halfway through 2022 quiz?
QUIZ: How well do you know your Irish history?
Gardener and broadcaster Dermot O'Neill has died aged 58
You may also like
1 month ago
Elon Musk accused of sexual misconduct involving flight attendant on private jet
1 month ago
Elon Musk's $44 billion acquisition of Twitter on hold due to fake accounts
1 month ago
"Incredible and dangerous narcissism" – Michael D. Higgins slams Elon Musk's purchase of Twitter
2 months ago
It's official, Elon Musk is buying Twitter for an obscene amount of money
2 months ago
Tánaiste condemns homophobic attack in Dublin City Centre
2 months ago
10 of the best tweets about the Irish census
Next Page