Is former German goalkeeper Tim Wiese about to join the WWE?

Ex-German international goalkeeper Tim Wiese claims he has received an offer from the WWE. Seriously.

The former Kaiserslautern, Werder Bremen and 1899 Hoffenheim netminder is now actively involved in bodybuilding and told German newspaper Bild that he had received the offer from the WWE. He had his last contract with Hoffenheim cancelled by mutual consent when it was decided that his new sculpted body was not befitting of a professional goalkeeper. It's not very hard to see why:

He made his international debut for Germany against England (pic below) in 2008, coming on as a second-half substitute in a friendly played in Berlin which England won 2-1. He went on to earn six caps in total.

Regarding the WWE offer, he told Bild: "It's about working for them as a wrestler. I will listen. I don't s**t my pants. Why should I immediately say no? Wrestling is very popular, especially in the United States. I will go through the enquiry with my agent next week." 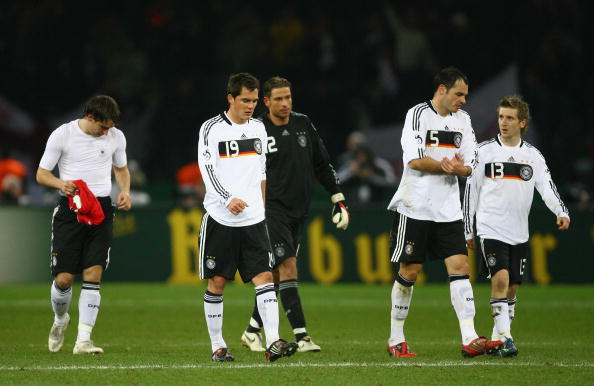 If the move goes ahead, we hope he uses the name 'The Wiese Grip' or maybe the more glamorous if somewhat dated 'Miami Wiese'. Anyone, anyone?

House of Rugby Ireland · Quinn Roux on finding a home in Ireland and Mike McCarthy brings the absolute HEAT!
popular
The JOE Movie Quiz: Week 85
20 of the best comedies to watch on Netflix right now
The 50 most iconic songs of all time* have been revealed
QUIZ: The JOE Music Quiz: Week 41
Yewande Biala releases statement discussing racism on Love Island
The JOE Friday Pub Quiz: Week 227
Gardaí warn of scam targeting AIB customers
You may also like
2 weeks ago
Mick Foley asks Vince McMahon to kick Donald Trump out of the WWE Hall of Fame
3 weeks ago
Chris Jericho and Bray Wyatt pay tribute to late wrestling star Brodie Lee
3 weeks ago
Former WWE wrestler Brodie Lee has died, aged 41
1 month ago
WWE Hall of Famer Pat Patterson has died, aged 79
2 months ago
The Undertaker officially confirms WWE retirement with final appearance at Survivor Series
3 months ago
QUIZ: How many of these classic WWE wrestlers can you name?
Next Page