It’s quite simple really. He’s a big fan of the club and wanted to show his colours.

The Wexford TD, who is well-known for his love of Italian football, was thought by many to be a Juventus supporter, and by our reckoning became the first Irish politician to turn up for work in Leinster House in a Serie A top last week. Wallace took to his website to explain where his allegiances lie in Italian football and just how committed to the club he is.

“For the record, I am a Toro supporter,” he said on his site.

“I have a season ticket with Torino and I stand on the second tier of the curva nord. I do not have a Juve season ticket. I have been to new Juve stadium once – and that was for Italia/ Czech Republic game.”

“I go to 6 or 7 Toro games each season. So far this year I have been to see Toro/Milan, Toro/Juve, and next Sunday, I will go to Toro/Roma. I eat and drink in Caffe Rossini on Corsa Regina Margherita- a Toro bar.” 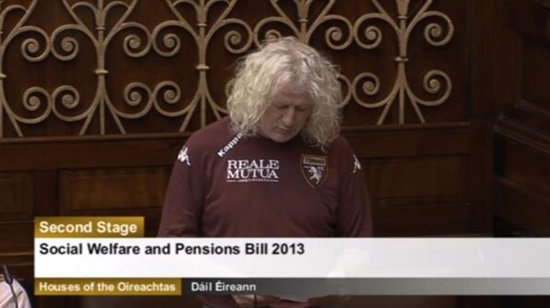 The Independent TD also goes on to explain his love for Italian football – he has only missed one World Cup or European Championship since 1982 and always watches the Azzurri play – and has been visiting Torino for more than 25 years as his sister lives in San Mauro.

Mick even signs off with ‘Forza Toro’.

Thanks for clearing up the confusion Mick.

Advertisement
House of Rugby Ireland · Quinn Roux on finding a home in Ireland and Mike McCarthy brings the absolute HEAT!
popular
Aodhán Ó Ríordáin passionately calls out Norma Foley in the Dáil
‘Dark red’ zones with stricter travel restrictions set to be introduced in the EU
The full list of all the new shows and movies coming to Netflix in February
Joe Biden has removed a bust of Winston Churchill from the Oval Office
“Nothing is more serious.” HSE Chief warns of worsening Covid-19 situation in Irish hospitals
Here's the lineup for The Late Late Show this week
10 prequels that are actually better than the movies that came before
You may also like
1 year ago
Juventus will have a new name in FIFA 20 after ending partnership with EA Sports
1 year ago
QUIZ: How well do you remember Zinedine Zidane's playing career?
2 years ago
Juventus post controversial tweet regarding the current Cristiano Ronaldo situation
2 years ago
Cristiano Ronaldo has agreed a deal to join Juventus
2 years ago
Michael Oliver's wife targeted by Juventus fans on social media following late penalty call
2 years ago
Cristiano Ronaldo scored a goal so sensational, even the Juventus fans applauded
Next Page