A Liverpool fan whose racist gesture was snapped and published to the world on Twitter has been arrested by Merseyside Police.

The man, who is said to be 59 and from north Wales, faces an investigation into the gesture, in which he appeared to impersonate a monkey.

Saturday’s FA Cup fourth round game between Liverpool and Manchester United was the first meeting between the sides since the controversial Luis Suarez-Patrice Evra racism allegations in October.

The fall-out from that game saw Suarez served with an eight-match ban for racial abuse, a decision which prompted an unprecedented defence by Liverpool of their player.

With emotions running high, there was always likely to be a few incidents at Anfield on Saturday – and the picture that started doing the rounds on Twitter has prompted decisive action, with an investigation launched by the police's ‘hate crimes’ division.

A statement from Merseyside Police read, “The man has been taken to a police station, and will be questioned by officers. Merseyside Police would like to thank North Wales police and Liverpool Football Club for their assistance with this matter.” 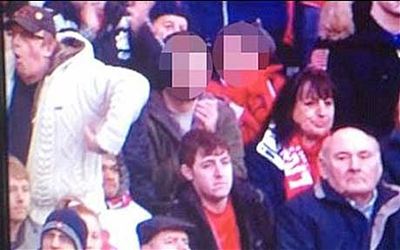 popular
Micheál Martin confirms he intends to return as Taoiseach
The JOE Friday Pub Quiz: Week 314
QUIZ: Step on up and conquer this tricky General Knowledge Quiz
An incredible Western crime drama is among the movies on TV tonight
An Oscar-winning war thriller is among the movies on TV tonight
Johnny Depp/Amber Heard trial movie unveils first trailer and it's not good
“Megaproject” MetroLink takes next step towards construction
You may also like
6 years ago
WATCH: This video showing 'hand-rolled ice cream' in Dublin is mesmerising
6 years ago
There's a new app that helps people find any food, drink or product they're looking for, locally
6 years ago
5 reasons why your business should 'pop-up' at one of Dublin's busiest stations
6 years ago
JOE BUSINESS: 3 great reasons you should pop-up in Dun Laoghaire this summer
6 years ago
This new app will help you keep track of the Luas strikes
6 years ago
TWEETS: Mixed reaction as Joan Burton steps down as leader of the Labour party
Next Page