Now Christian Benteke is for sale on eBay

Described as ‘only slightly used’ the wantaway striker has a £25m reserve price on the internet auction site.

We wouldn’t be at all surprised if somewhere down the line all football transfers were conducted like this, and we could all watch as clubs made bids in some online forum that you had to pay to view.

So while the Premier League go off to work on that idea, for now we have to make do with fan generated stuff like this. At least we hope it’s fan generated...

Somebody, surely not Paul Lambert, has put the talented Belgian striker up for grabs on eBay. The ad has some cracking lines, including ***No time wasters please from Tottenham Hotspur*** and * Be careful when trying to remove the 'One Season Wonder' sticker from Benteke's forehead*. 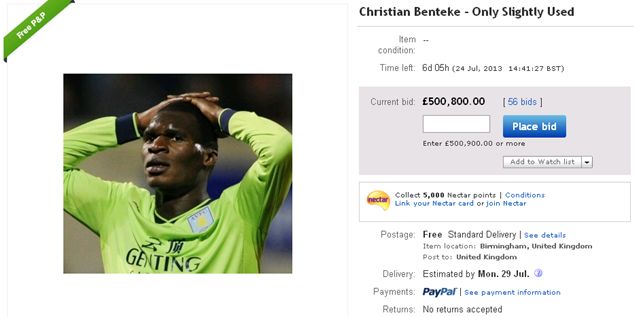 Thanks to David Clarke for the heads up and special shout out to the lads at myoldmansaid.com for putting it together.

The Big Reviewski || JOE · The Big Reviewski with Andy Serkis, Squid Game follow-ups & the return of Succession
popular
New €140 million road officially opens today, replacing one of the Ireland's most dangerous roads
Expert wants 10 antigen tests delivered each week to every family this winter
QUIZ: Can you master this General Knowledge Quiz?
The cleanest towns in Ireland have been named
10 things I learned while rewatching the first two seasons of Succession
The JOE Friday Pub Quiz: Week 265
The JOE Movie Quiz: Week 124
You may also like
2 weeks ago
Drunk man reported missing ends up joining search party to find himself
1 month ago
WATCH: The interview between Niall Horan and Lizzo is an absolute flirt-fest
1 month ago
Why improv comedy is the exact night out we all need right now
5 months ago
Adam Sandler reunites with IHOP hostess who turned him away
5 months ago
Shrek fan notices X-rated Easter egg that we all missed as kids
8 months ago
"I am not a cat" - Texas lawyer turns on kitten filter during court Zoom, and can't switch it off
Next Page