You have to admire the sheer honesty of it all…

Mexico left it late, very late, to keep alive their World Cup hopes at the weekend and Panama were left to rue what might have been.

The game was tied at 1-1, a result which would have left Mexico’s chances of qualifying for Rio hanging by a thread, when Raul Jimenez conjured up an outstanding bicycle-kick effort to hit Panama with a sucker punch and at the very least guarantee his side a play-off with New Zealand. If results go their way automatic qualification is still on the cards.

Panama however were left to lick their wounds, and the country’s Critica newspaper was as blunt as you could possibly get to describe the match-winning goal. The word for bicycle-kick is chilena in case you were unsure. 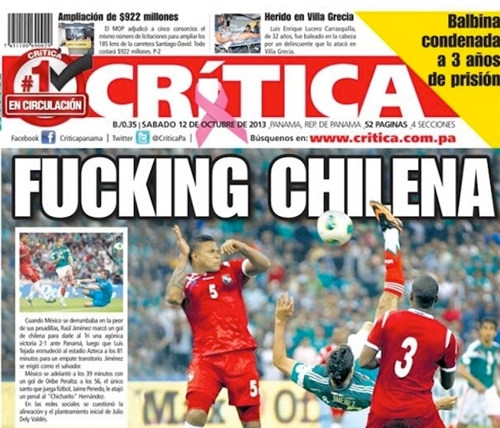 Hat-tip to Who Ate All The Pies

popular
One of the best action movies of recent years is finally available to watch at home
The JOE Movie Quiz: Week 138
QUIZ: Give this General Knowledge Quiz a whirl
QUIZ: Can you name every Batman actor in three minutes?
The JOE Friday Pub Quiz: Week 278
Irish employers urged to "take time" when lifting workplace restrictions
QUIZ: See if you can ace this General Knowledge Quiz
You may also like
1 year ago
Trump's former chief strategist Steve Bannon charged with fraud over Mexico wall bid
2 years ago
WATCH: Netflix have released the first trailer for the second season of Narcos: Mexico
2 years ago
Trump claims that the children detention centers at US/Mexico border are getting "great reviews"
2 years ago
Freak hail shower in Mexico sees 1.5m of ice fall, burying cars and damaging houses
2 years ago
Here's how to be in with a chance of winning a trip to Mexico for two
2 years ago
El Chapo's family is launching a clothing line with his name on it
Next Page