Pic: A six-year old boy applied for the Celtic manager’s job; the club sent back this classy response

With Ronny Deila now at the helm, he obviously didn’t get the job, but this is a lovely touch from Celtic nonetheless.

Most kids that are crazy about football dream of becoming players rather than managers, but some have an ambition to get into management from a very early age; in the case of young Aiden Headridge from Dundee, a very early age indeed.

Headridge, six years old, from Dundee and a huge Hoops fan, sent a letter to the club applying for the manager’s job after it was vacated by Neil Lennon only to be disappointed when Norwegian Ronny Deila was given the gig instead.

We can’t imagine that many football clubs are in the business of writing rejection letters to managers who don’t get the job, but Celtic Chief Executive Peter Lawwell made an exception in Aiden’s case, replying to his application with a lovely letter explaining the decision to appoint Deila and sending on a gift to Aiden for good measure.

My 6yo brother wrote to @celticfc about becoming new manager, and club sent this back. Will put a smile on his face! pic.twitter.com/M5wIcwM1wJ 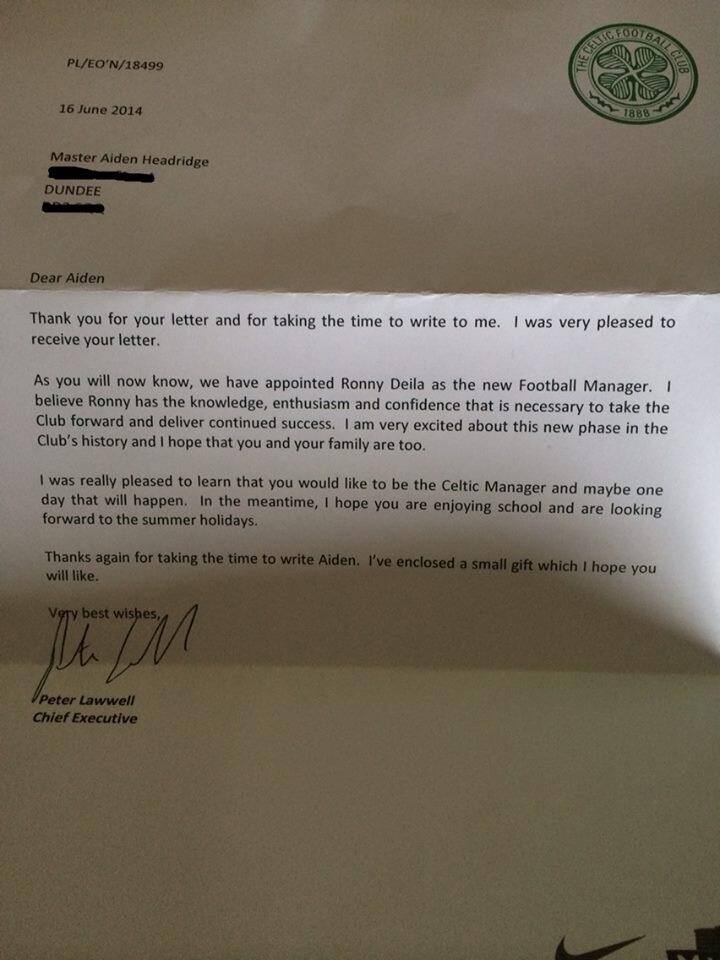 Advertisement
House of Rugby Ireland · Quinn Roux on finding a home in Ireland and Mike McCarthy brings the absolute HEAT!
popular
The 50 most iconic songs of all time* have been revealed
Man arrested and charged for breaching Covid regulations in Kildare
QUIZ: Name all the countries of the EU that contain 2 vowels or less
QUIZ: Can you name the Marvel Cinematic Universe film from just a single screen shot?
This hidden Back to the Future 'mistake' has a subtly brilliant explanation
QUIZ: Can you name all the teams in the NBA from their locations?
Warner Bros. plan new Harry Potter movie and they want Daniel Radcliffe to star in it (Report)
You may also like
1 year ago
Ringrose and Ruddock epitomise Leinster class as PRO14 title retained
2 years ago
After playing in the Liam Miller tribute game, Roy Keane went for a kickaround with some local Cork kids
2 years ago
WATCH: Ireland and Celtic player Johnny Hayes rescues young Rangers fan from bullies and delivers lovely message
2 years ago
Alex Ferguson pays glowing tribute to Liam Miller in official tribute match programme
2 years ago
Liam Miller charity match organiser dismisses reports that the GAA have given go-ahead for Páirc Uí Chaoimh
2 years ago
Roy Keane and Paul Scholes among Man Utd legends coming to play in Cork for Liam Miller tribute match
Next Page