As we know all too well, taking on the reigning World and European Champions is no easy task and one Finnish newspaper is under no illusions as to how Finland will line-up against Spain tonight.

Trailing France by four points and leaders Spain by five in Group I, Finland have little chance of qualifying for the World Cup at this stage, but one wouldn’t blame them for a damage limitation approach against Vincente del Bosque’s star-studded outfit in Helsinki tonight.

Finnish newspaper Urheilu made their feelings clear on how Finland will, or at least should, line-up against their illustrious opponents with a brilliant graphic detailing the potential formations of both sides. 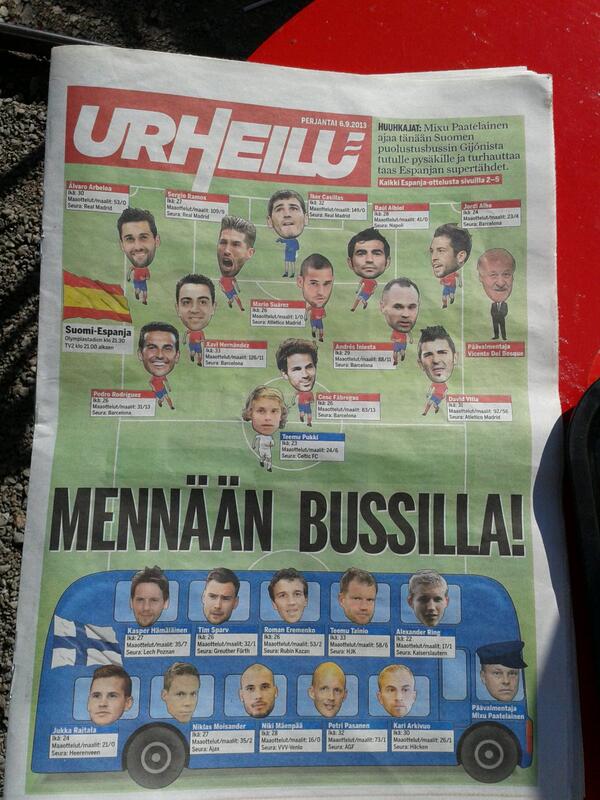 The accompanying headline ‘Mennään Bussilla’ translates (through Google Translate at least) as ‘We go by bus,’ but the graphic makes it fairly clear in any case; whether the Finnish team take the hint or whether it will make any difference anyway will become clearer a little later on this evening.

popular
Gardaí unveil new Armed Support Unit vehicles to replace older models
Netflix has just added 33 very big movies to its library
The full list of cancelled flights in and out of Dublin Airport on Monday (so far)
One of the greatest crime movies of all time could be getting a sequel
Amazon Prime Video has just added 51 big movies to its library
Increase in passenger charges at Dublin Airport may be on the way
An action-packed thriller is among the movies on TV tonight
You may also like
1 year ago
Ireland set to be part of potential 2030 World Cup bid
2 years ago
QUIZ: How well do you remember the 2018 World Cup?
3 years ago
England World Cup-winning goalkeeper Gordon Banks has died, aged 81
3 years ago
England's World Cup win over Sweden led to record levels of alcohol poisoning
3 years ago
Netflix has added a must-see documentary series on the World Cup
3 years ago
FIFA to propose a new annual Club World Cup
Next Page