Fans of both sides are going to great lengths to show their support for Mayo and Dublin, but two Dubs went to great depths to back the boys in blue, great depths indeed.

Up until as recently as last week, there was no doubt about who was winning the propaganda war in the run-up to the All-Ireland Final this weekend thanks to the seemingly endless supply of Mayo songs, pictures from all around the world and even snaps of various celebrities pledging their support for the Green and Red.

The Dubs have slowly but surely been fighting back this week and after a couple of decent songs in the last few days, we were sent in this picture this morning of two Dubs, one of whom we can identify as Damien Finglas, lending even more oxygen to the Dublin bandwagon from the middle of an unidentified ocean. 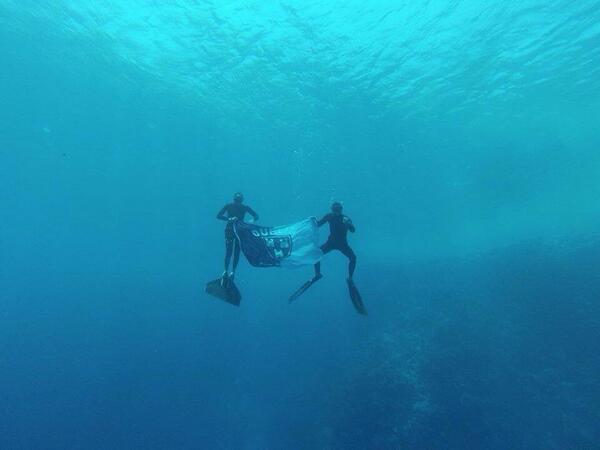 We still haven’t a scuba who’s going to win this weekend but at least the battle between the various sets of fans is becoming as even a contest as what we’re likely to see in Croker on Sunday afternoon.

Hat-tip to Neill Foran for sending this one into us

popular
Simon Cowell concerns fans with appearance as they 'don't recognise him'
Junior doctor 'fell asleep' at the wheel after 12-hour shift then mowed down two women and two kids
An Oscar Best Picture winner is one of the movies on TV tonight
Netflix has just added 30 big movies to its library
Starbucks worker breaks down in tears after they're scheduled to work 8 hours
Woman left confused after DNA test shows child isn't husband's despite her claims that she never cheated
One of the best movies of the decade has just been added to Netflix
You may also like
1 week ago
Dublin nightclub suspends security guard following racism allegations
2 weeks ago
QUIZ: How well do you know the towns and villages of Dublin?
4 weeks ago
6 deadly whiskey distilleries and experiences to try out in Dublin
1 month ago
Man in serious condition following assault near Connolly Station in Dublin
1 month ago
Gardaí investigating "all the circumstances" following discovery of woman's body near Luas tracks
1 month ago
Two girls seriously injured in crash involving car and pedestrians on busy Dublin street
Next Page